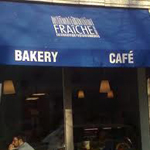 If a chef creates recipes, does it belong to the restaurant where they were created? That's the basis of a lawsuit involving Evanston's Fraiche bakery, home of the Cinnamon Bomb where the chef quit two weeks ago, then returned to take the binders containing the recipes. According to the owners, the chef signed a non-disclosure agreement and the recipes were "developed, assembled tested and honed over the course of 3 ½ years. That work cannot be readily reproduced. The damage to Fraiche’s goodwill from the inability to offer these items would be irreparable because it cannot be measured in money damages.” [Tribune]
[Photo: Yelp]