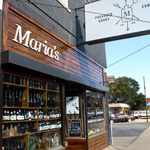 Want to know a neighborhood? Ask a local. Allium chef Kevin Hickey gives a great tour of his favorite dining and drinking haunts throughout Bridgeport. From his favorite bar, Maria's Packaged Goods, to Lina's for thin-crust pizza to ethnic burgers at Cork & Kerry at the Park to Ricobene's (where he's only allowed to go once a year), Hickey's tour really highlights some great South Side eats. [Serous Eats]