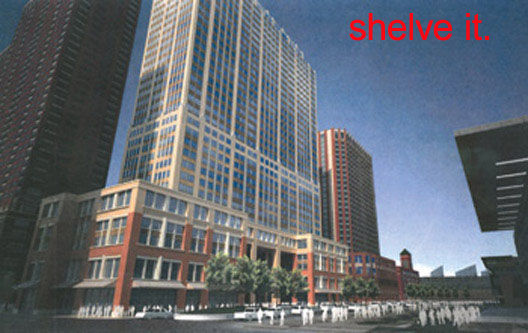 SOUTH LOOP— No need to make peace with the architecturally contentious Prairie Blocks hotel development. It's not going through. This week, a bankruptcy judge dismissed the owners' Chapter 11 case, clearing the way for creditors to foreclose on the parcel bounded by Cermak, 21st, Indiana, and Calumet. It remains a 'choice' development site, but there's no indication that anything rivaling the 1,790-room mixed-use proposal will emerge.

GLENCOE— It would appear y'all slept on your chance to snag a relatively-accessible Frank Lloyd Wright house. One of six Wright structures belonging to the Ravine Bluffs Development in Glencoe, the Charles R. Perry House was sold late last month for $500K after nearly a year on the market (and a $200K price reduction). It needs some fundamental upgrades, but is otherwise a slammin' beach-proximate home on a third of an acre.

CABRINI-GREEN— SoNo East is really asserting itself. Finishing touches are going into the 22-story, 324 unit rental tower, which expects to open to occupancy in June. A saving grace for an area now overrun by strip malls and big box outlets, SoNo East won't quite measure up to its big brother SoNo West (28 stories). But it resolves a development we've waited years to see the end of.

ANDERSONVILLE— This week's edition of least expensive properties has Curbed prowling Andersonville (remotely) for bargain entry points to the boiling hot nabe. Mercifully, your options aren't dominated by studio units or confined to substandard dwellings. Have a look, you may be surprised.