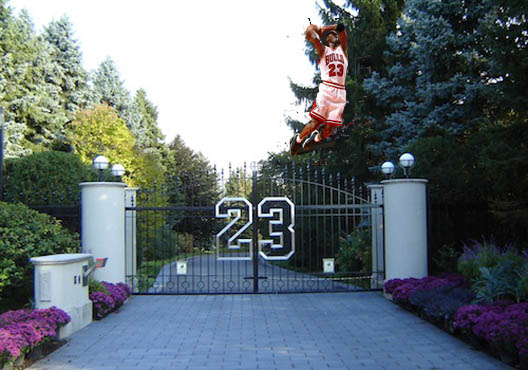 HIGHLAND PARK— No security gate can ground His Airness. He's going to fly the coop if he wants to. And that's exactly what's shaping up in the North Shore: Michael Jordan has listed his 56,000-square-foot compound for $29M! The ask would need to reduce by nearly half for it not to set a regional sales record. You've probably heard the news by now, but why not check out Curbed's take?

EAST VILLAGE— Folks got all fired up on our message boards this week over new close-up perspectives on the 11-story rental development slated for Ashland & Division. The prime development site has spawned a cauldron of debate over appropriate site density. Over the months, more density has been added. And unusually, there's little to no parking provision.

BUCKTOWN— Remember the Urban Sandbox? The much-publicized modernist development for the most part achieved high prices for its range of sharply-designed whimsical single families and condominiums. Perhaps the best of them all, the award-winning 1625 W. Wolcott is now listed for resale at $2.499M. Like the other single fams, it has a little sandbox built into the deck (now with plantings). How cute.

LAKEVIEW— Rosie O'Donnell is reassessing her Chicago property holdings, according to her publicist. On the block, her recently purchased Lakeview house. Bought impulsively for her kids' sake, they don't spend enough time there to make it worthwhile. With her show in the gutter and contracting, speculation abounds as to whether it's the beginning of the end for Rosie's Windy City adventure.