Share All sharing options for: Sarah Grueneberg Dishes on Her Top Chef Experience

Spoiler Alert: If you do not want to know what happened on the finale of Top Chef, stop reading now. 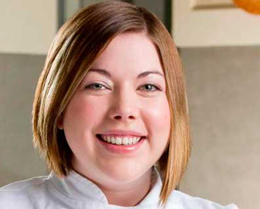 If you haven't seen the Top Chef finale then you may as well stay in bed until you do. It likely won't be easy to avoid knowing who won, since after weeks and weeks of crazy challenges, battling the heat, working barbecues, chopping food out of ice blocks and more, Top Chef came to an end Wednesday night and the news is out.

When the season started there were six chefs from Chicago—Heather Terhune (Sable Kitchen & Bar), Beverly Kim (Aria), Chuy Valencia (Chilam Balam), Chris Jones (Moto), Richie Farina (Moto) and, of course, finalist Sarah Grueneberg (Spiaggia). In the end there was just one and Chicago hoped and prayed our local girl, Grueneberg, would not only take home the top prize as the second winner from Chicago, but also as the second female winner in the show's history (behind Stephanie Izard). So when the judges called out Paul Qui's name, you could almost hear a collective groan sweep across the city.

Grueneberg and Qui both presented amazing meals from two very different perspectives. As Bill Terlato told Eater earlier this week, people watching would be in for a great show and that choosing the winner was definitely not an easy decision to make. And apparently, the judges wanted to call it a tie, but Bravo execs wouldn't allow it—that just wouldn't make for good TV. Eater, granted with Grueneberg's first interview after Wednesday night's results, talked with the chef from New York to chat about the final moment at judges' table, what she would have done with the money and how she really feels about Qui winning.

So how are you feeling this morning?
I'm feeling great. I feel at peace. It's all good.

The finale was shot in January so you've had some time to let reality settle in. But how was it hearing the news initially?
It was devastating. You could see it on my face. It was like 5 a.m. and the judges were really battling it out. I was just sad. It's weird because when you're on a show like this it becomes your reality. You want something so bad and you get so close. I'd rather be in this situation than never have done it at all.

What went through your mind when you heard Paul's name?
There's a little bit of drama there. They'll say one thing and there's a pause and you want them to say it. Paul, he was so consistent the whole season and he's such a great chef. I knew if he won it was OK. At that point it was splitting hairs. They said it was the best food of any finale – how amazing is that? And I had the best dessert according to Padma [Lakshmi]? Emeril [Lagasse] said that, "If you only have 10 amazing dishes in a year then you truly are blessed, you did that for me right here." Pasta is what I love to make so how fantastic?

How long did it take you to recover when you didn't win?
It took about three weeks for me just to feel normal again and get back to work on my own. When you're there they tell you when you're getting up and eating. Tony [Mantuano] is amazing and I have an amazing support group. I have my family. I'm really trying hard not to dwell on the little details that maybe put me in the second spot. I can't change it. It is what it is.

How were you able to keep this secret for so long?
Everyone at work kept looking at me and saying, "So...?" It was tough. I knew how important it was for people to see it live and to see it for what it was when it was happening. It was hard. With [my fiancé] Jaime [Canete] (Purple Pig), I was like, "You need to watch it," in regard to the whole season. Him and my mom being there ... that's why I was so emotional in the end. You don't want to lose in front of your parents! I think that Paul was the right choice, but I think I have a lot to offer and my stride is just coming.

Were you shocked to see Jaime, your mom and the others in the restaurant?
That happened about halfway through the night. [The staff was] saying, "This table wants to see you," and I thought, "If they're here I'm going to lose it." Then my mom saying she's never eaten food like this and she's so proud of me. It was an amazing feeling and I was so happy they were there.

I heard that Jaime's mom said at the finale party at Spiaggia last night that the judges wanted to call it a tie, but Bravo said no.
The rules say there can only be one winner. I know that Tom [Colicchio] said, "Can't we flip a coin? Can't it just be a tie?" That's how close it was. Paul being so consistent all season, he really deserves it. It's not the end of me. If there's an All-Stars my friend...

If you had won, what would you have done with the money?
I don't know. What's unique about the situation is you don't think about the money. It's the title; that's the biggest prize. I probably would have bought a nice condo.

What are you doing with the $30,000 you won during the season?
I'm going to start that bank account for a down payment!

How's are things with Beverly and Heather now?
They're both great. Heather was my roommate from the get go. She's a super strong personality and I fed off of her. She's 10 years older than us. She was a chef in the kitchen before female chefs were in the kitchen. I think Beverly really found herself this season the same way I did. When she gets in the kitchen something clicks, she's an animal and she's an amazing chef. One thing I really respect is she wasn't scared to do something new.

What was your favorite moment from the season?
Aside from cooking in the finale, winning the Patti LaBelle challenge and being able to cook a dish that was from my family and to make them very proud.

What moment was the low point?
The second-guessing; I was on the top of the bottom a lot and the critiques I got from the judges helped me cook well in this competition. At the same time you only have five seconds to make a decision on a dish. It's a lot of mind games. It's trying to remain calm and really just follow what you do and not second-guess. I did second-guess myself.

What's next for you – any big plans or keep trucking on at Spiaggia?
Absolutely. I love Spiaggia. The team is really supportive and I feel blessed to have such a great team. I need to get back to Italy. I want to go to Spain, Portugal, Japan. I want to travel and develop my style of food.

You mentioned you're going to offer your final meal menu at Spiaggia. When will that roll out?
Considering that next weekend is the Housewares Show, probably the following week. If I can put it on this week I'll try. But it's hectic.

Do you have anything to say to your Chicago fans?
Thank you for believing in me and cheering me on. So much is the momentum of the fans. Walking down Michigan Avenue and people honking and screaming, "top chef!" I want people to know there's Café Spiaggia if they think they can't afford Spiaggia. I'm the chef of all Spiaggia. I want people to come in and taste the food.

I wish I was saying congratulations on being top chef, but you still deserve congrats. You did a fantastic job.
I won. I really have. I've won confidence. I won friends. I won really pushing myself. When you're there, you're the only one you have. Just them saying this is the best food in history [of Top Chef finals] ... it's not a problem. I'm just so happy that I just came off strong and that people were happy with my food and that I pushed. The judges were excited about how much I grew and how I pushed the boundaries of my comfort.
· Bill Terlato Talks About Judging Top Chef Finals [~EChi~]
· Notes From Spiaggia's Top Chef Finale Party [312DD]