Share All sharing options for: GM Alex Cullum Talks About the Hubbard Inn

This is The Gatekeepers, in which Eater roams the city meeting the fine ladies and gentlemen that stand between you and some of your favorite impossible-to-get tables. 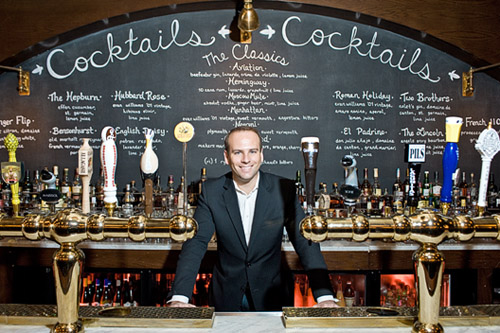 It was his passion for food that lured Hubbard Inn general manager Alex Cullum away from being a project manager and engineer for a construction company, but it almost didn't happen. Cullum approached Hubbard Inn partner Adolfo Garcia about getting into the business about four years ago, but was about to get married so decided to stick with a secure job.

Then about a two and a half years later, Cullum started getting that itch, so he again called on Garcia, who put him to work initially bussing tables at English, the group's restaurant/bar up the street. Cullum ended up working nearly every job in the place to get a feel for how the restaurant was run and eventually moved into management. The team approached him about being GM at Hubbard Inn before the multilevel restaurant opened. Cullum jumped at the chance and worked alongside the rest of the team to get Hubbard Inn open, where he's worked ever since.

It's 8 p.m. Saturday. What's the wait for a table?
For a walk in, you're probably looking at anywhere from 45 minutes to an hour and a half. That's true unfortunately. That's the busiest time. On the second floor, we keep a block of four to seven tables for walk ins. But on the first floor, it's 45 minutes to one and a half hours, where most people want to sit.

Other than going up to the bar to order a drink, are there any other first-come, first-serve seats in the space?
The entire bar serves the entire menu, on the first and second floor. People who get a seat at the bar can take full advantage of that.

How hard is it to get a reservation on busier nights?
Thursday you can most likely get a reservation day-of early in the day. Friday and Saturday, pretty much, it's two to three days out to get a reservation, but once it gets toward Thursday, it gets harder for the weekend. Just plan ahead. We're not weeks out and we try to accommodate every guest who tries to make a reservation. If you don't mind sitting next to other people, the communal table is a big option.

As a customer, is there anything I can do to make my wait shorter, like cash or gifts?
[Laughs.] Unfortunately no. We definitely don't accept cash or anything like that. But we also do everything we can to try to accommodate you as soon as possible. There's nothing that will help, but courtesy to the host desk is the best thing. You get people who feel entitled and will see some open tables and don't understand why they can't be seated right away, but then two minutes later a reservation will come in that needs that table.

How do you handle people who act entitled?
Frankly, depending on how rude they are, we'll just apologize and put them on the waitlist and offer to have them [go to] the bar to have a drink. For the people who are nice and waiting, we'll take good care of them. For the others, we just put on our game face and explain the situation and say we're doing everything we can for them. Nice people are looked upon better.

Tell me about your favorite customers, whether a specific type of diner or regulars.
I like people who come in multiple times because they understand our menu is always evolving and they're coming in to see what's new. But the new people who come in for the first time, and when they see the space, their reaction is one of my favorite things. Their adventurousness when ordering off the menu ... we have roasted bone marrow and sweetbreads and people in Chicago are definitely open to trying new things.

What about celebrities? Do you get a lot over there?
I wouldn't say often. On a Thursday afternoon, Zac Efron randomly came in with two friends and ate burgers. We'll get some local celebrities and political types, but nothing off the charts. We're not looking for it or the publicity for getting the movie stars. If they come in we treat them like any other customer.

How do you deal with VIPs when there are no tables left to give?
Typically there will always be a table or lounge that will be open. We'll accommodate them. There's always at least one or two tables available, that would not necessarily be held for a VIP, but if we get a walk in and get totally slammed and need to utilize them.

What's the strangest request you couldn't accommodate?
One of the strangest requests that happens a lot is people want their steak tartare cooked. Maybe not a lot, but more often than you'd expect. Once we explain it to them ... we explain how it's prepared and that it's a raw dish. Someone asked if we could still brown it in a skillet.

After people are done eating, but want to hang out, does Hubbard Inn become clubby later?
Later on in the night, especially on Friday and Saturday, most of the lounge areas are reserved, but other people do hang out at their tables. There are tables by the bar and that is a great area and it doesn't get jammed. It's just people who want to have a few cocktails at night and don't want to deal with the craziness. The second floor definitely gets packed, but not out of control. The crowd, it isn't necessarily older, but is a more mature crowd. There's never been a fight or anything like that. People come to enjoy the space and enjoy their time.

What's the one Gatekeeper tool you need to do your job?
Patience, it's the biggest tool, whether with customers, staff or any situation. Having patience and a sense of calm, like dealing with minor situations or people who feel entitled, [it's important] to keep things from escalating.

When you're not at Hubbard Inn, where are you drinking and eating?
If I'm not at my house, maybe spots in the West Loop where we live, like Tasting Room or Vivo, which is one of my favorites. We'll go to Hot Chocolate a lot. That's one of our go-tos.

For more Gatekeepers published today from across the Eater Universe, head over to Eater National.