Share All sharing options for: Next's elBulli Menu Revealed in Spanish and English

Editor markup for Next's El Bulli Dishes. This is only visible in the story editor.

Tonight is the night that Next kicks off its elBulli menu—did you get one of the coveted first-week spots? If not, and since season tickets have still not been released, Eater has a sneak peek at some of the dishes that will be served as well as the full menu, written in Spanish, but also translated into English.

As explained earlier this week, Grant Achatz, Dave Beran and their team of chefs crafted a menu highlighting some of the best dishes from the last 25 years at Ferran Adria's famed Spanish restaurant, elBulli.

The menu kicks off with a nitro caipirinha with tarragon concentrate from 2004 then jumps back to 2000 for the hot/cold trout roe tempura before moving back to 2005 for the iconic spherical olives. Throughout the rest of the menu, which comprises 28 courses (although it had earlier been reported as 29, but even at 28, it's still a lot of food), the dinner highlights some well-known items, some personal favorites (like Achatz's cuttlefish and coconut ravioli with soy, ginger and mint) and pastry highlights from Adria's brother, Albert Adria, like the chocolate donuts, which may surprise you.

We could go on and on and continue listing what's on the menu, but wouldn't you just rather have a look for yourself? Here they are, below, in two parts for easier viewing when you click on the images to zoom in. 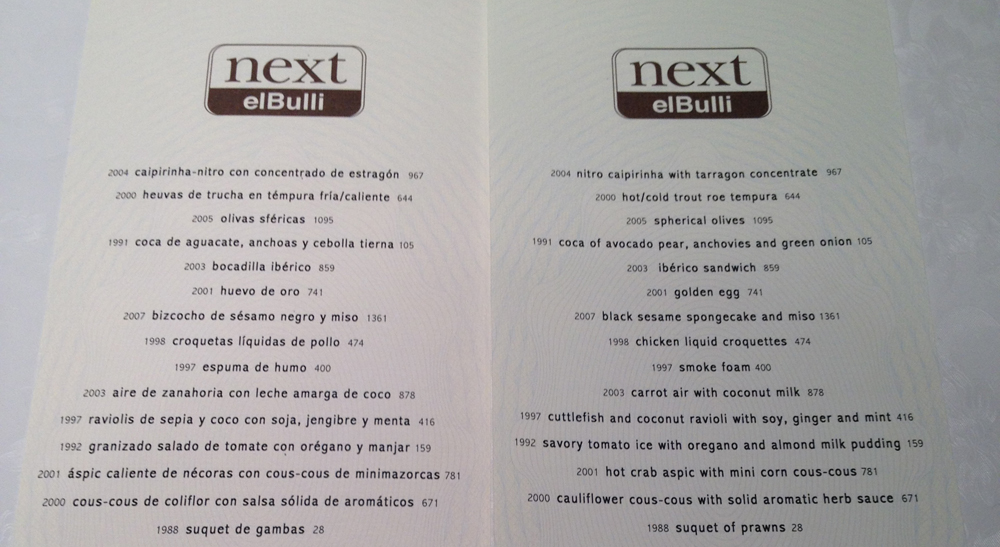