Share All sharing options for: Bunk Down in Hemingway's Old Lair; Cheapest Properties 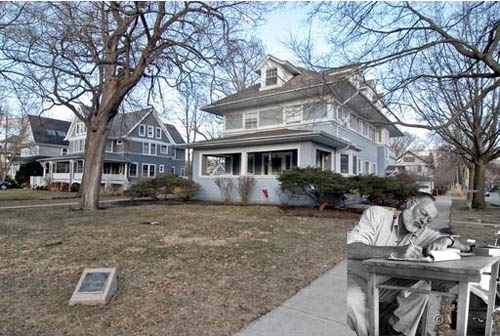 OAK PARK— PaPa Ernest's childhood home hit the market this week for $525K. A botched partnership between the Ernest Hemingway Foundation of Oak Park and Dominican University meant to preserve the home as an educational/historical site led to the open market listing. Expect the Foundation to vet buyers to help ensure future ownership in harmony with preservationists.

LINCOLN PARK— Today, we launched a new Curbed feature on cheap properties in coveted neighborhoods beginning with five listings from Lincoln Park. If you're hoping for single family fixer-uppers, you're bound to be disappointed. All but one are studio units. They are, however, close to the lake and all the Clark Street hubbub. Enjoy!

STREETERVILLE— Curbed drops by the fledgling construction project that goes by the knockout name, 500 North Lake Shore Drive. To eventually mature into a full grown 45-story tower, it's just reached nine stories. A 10-story parking structure will join in at some point. Completion is scheduled for Sept. 2013.

NEAR WEST SIDE— The mayor's office announced a big capital budget for City Colleges this week. The crown jewel of the five-year improvement and expansion program is the $251M new Malcolm X Campus sited directly opposite the old. The medicine-centric expansion will include two large three-story buldings and a parking garage, and will materialize sometime around 2016.