Share All sharing options for: Leopold's Christy Agee Talks About their First Year 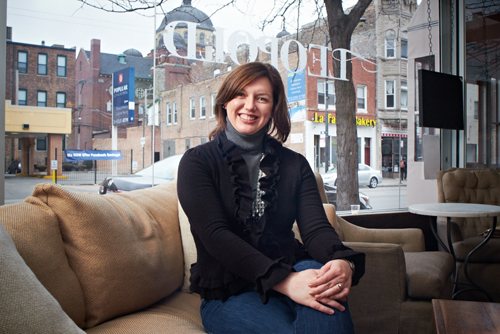 After years of owning Witts in Lincoln Park, Christy Agee wanted to turn things up a notch. She had gained more wine knowledge and wanted a place where she could expand the wine program and pair it with quality food. Even though Witts is more of a sports-focused neighborhood spot, she worked with chef Jeffrey Hedin to amp up that menu, but even then she still wanted more. After seeing what they could do at Witts, the pair set out to find a new location for a locally-focused menu and that's when Leopold was born. And West Town was the perfect location; it didn't hurt she and her husband live just a few blocks away and loved what was happening in the neighborhood with places like Havana Libre, West Town Tavern and Mexique. So a little more than a year ago, Leopold, a Belgian-inspired restaurant, opened its doors to the public.

What is the actual anniversary date?
We opened to the public on Jan. 4, 2011. We did a small friends and family on New Year's Eve of 2010. And we didn't have our liquor license right away, but got it about two weeks after we opened.

How did that affect you?
Ideally you have your liquor license when you open and ours was such a long drawn out project that we wanted to get people in the seats. In hindsight, it was nice to have a couple of weeks to make sure the staff was comfortable with the menu items and we could make tweaks to the beverage program.

How has the beverage program affected your success?
It complements the food Jeffrey is doing. I take care of all of the wines and my manager, Caroline, does a lot of the back office and entire beer and spirits program. We continuously look for seasonal items to complement Jeffrey's focus on seasonal cuisine. I think the beverage program ... we've gotten into doing more seasonal cocktails and just did a month with gin cocktails. We're always learning about fun new ways to showcase the seasonality through our beverage program.

So why did you want to open Leopold?
I must have been crazy! I am kidding. I've had Witts for six years this May and it's a great neighborhood bar with more of a focus on sports. I had grown more in my knowledge of wines and wanted a vehicle where I could explore a more comprehensive wine program, and coupled with my chef, Jeff, that was when we started collaborating on things when he got to refine the menu [at Witts] to more sophisticated bar food. We then realized we had a true opportunity on our hands to expand. It was really his involvement coupled with my love of wines that allowed us to start exploing that as a concept.

Why this location?
It was a couple of factors. We looked at quite a few locations and took some time to settle on this as the perfect spot. Of course there are business matters involved and also looking at oppoprtunites at the space itself. Looking at the former Relax Lounge space, we knew we wanted to build a new kitchen. I've lived at [nearby] for about seven years and we've been going out in that area for some time and have seen it grow and evolve. It's an exciting strip there with the diversity of cuisine. You have everything from West Town Tavern to Mexique and Natalino's and Havana Libre. There's so much fun activity going on in that neighborhood.

So how has the first year been?
It's been really really good. There are certainly plenty of lessons we've learned, but that's the exciting thing. No two days are the same and you ask how you can grow. There has been a lot of that that has transpired over the last year. My staff is incredible where I don't have to be at both places all the time, although I typically am. Those are some really positive things when looking back over the first year and taking what we've learned to focus on for the next year to make sure we're properly positioning ourselves as a seasonal restaurant. Everyone thinks Belgian cuisine is laden with heavy flavors but it's not. We're excited for the next many years.

Does it feel like it's been a year?
No, not at all. We started talking about our year anniversary party back in like November and even then we said we couldn't believe it was already upon us. And now it's another month since we've been open [a year]. That's part of the frenetic pace of being in this industry.

Other than the professional side, how has it been emotionally having a small neighborhood restaurant?
It's tough and such a roller coaster. You have those days where you say, "Why I am doing what I'm doing?" but those are challenges beyond your control. So you step back and say I can't do anything about that. Personally I've put a lot of myself and my energy into the business. I don't have kids and so these are my babies. You have a bad review come out and you're like, "Wow, you just called my baby ugly." But then you get past it. I talked to [West Town Tavern owner] Susan Goss who said you have to ignore it and you can't please everyone. Knowing everyone in the business goes through this helps.

And the worst?
It's a lot of time. It's a huge time commitment. I was ready for it in a certain sense, but another part of me wasn't. I understood I'd be working crazy hours and then you get into it. The worst part is the stress of not knowing [what's coming] and daily operations. I wanted to take off tomorrow for my husband's birthday, but it's not looking good right now.

What big lessons did you learn in the first year about running a restaurant?
At the end of each day I self-evaluate and look at every customer I interact with, whether I poured wine properly or thanked a guest when they left. It's staying on top of anything you can do better. I've always learned and am still trying to learn how to take constructive criticism, which can be very difficult. But I'm trying to do a better job of implementing that. It's more of what can I personally be doing different and how to handle situations differently.

What's next for Leopold, or you—any expansion plans?
This was a great first year and we've got a very solid foundation on what we've built Leopold to be and we're just going to continue moving forward with the great concept we created. Of course we talk about opening other places, but at this point I want to focus on building Leopold where I want it to be. I think there's still a lot of opportunities for the business and things we can continue to work on promoting, like the seasonality of our menu and getting that information out to the public. We've talked about brunch, but that's always the elephant in the room because no one really wants to talk about it. The actual execution is never fun for anyone involved except for people who really love brunch. But yeah, there's still a lot of opportunity to focus on what can be done and then we'll start looking into other projects.

For more One Year In posts published today across the Eater Universe, head over to Eater National.