Welcome to Shit People Steal, in which we ask restaurateurs what items in their restaurant have been (or are frequently) stolen. 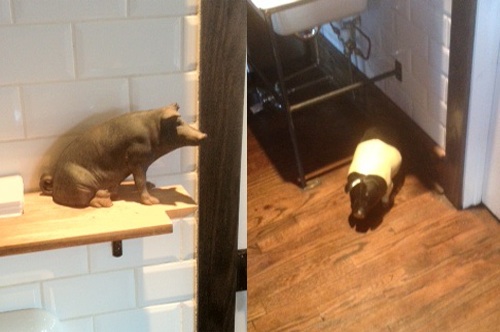 In the latest edition of Shit People Steal we catch up with chef Charlie McKenna who recently noticed two of his vintage piggy banks had gone missing from Lillie's Q. He used to have nine of them, and now he's down to seven. Right now he has no leads on where they may have gone, but he does have his servers on alert to make sure the other seven stay put. But we'll let Charlie tell you the rest of the story:

One was stolen off the host stand and one was stolen off the sink outside the bathroom. They were old cast iron statues that were my grandmother's and they're at least 35 years old, but more likely around 50. She's had them since I was little. They were black cast iron, like a large pot. The one on the host stand was small and could hold like two quarters. The one on the sink was a good five pounds and was the size of two of your hands; it could fit into a big purse or bag.

A customer was asking where we got the pigs and then one went missing. Some I bought online, but some were [from] my family. It's the whole southern BBQ connection and the pig has always been a staple in southern cuisine with bacon, pork chops, etc. It started with my grandmother, but my dad has a ton.

I'm a little discouraged in people's morality. You're taking a restaurant's property out of the restaurant just because you want it. To me, I just think it's bad. I mean, with Google and eBay you can probably go online and find a ton. You stole a family relic from a restaurant.