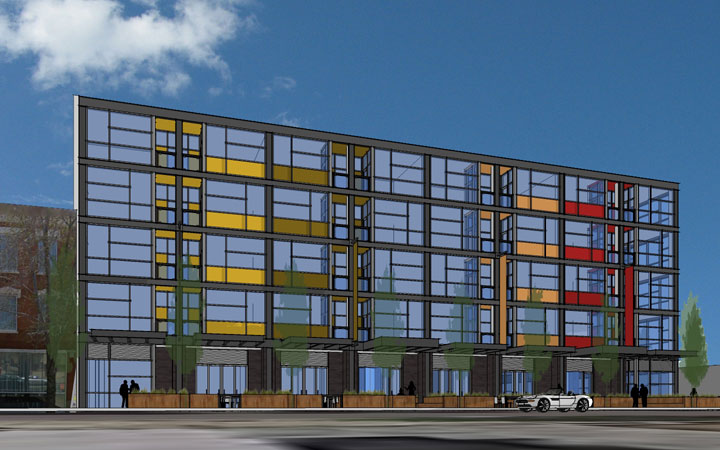 WICKER PARK— Months-old but newly-illuminated renderings for a 52-unit mixed-use development at Division & Honore are starting to garner serious attention. There's been some back-and-forth between the developer and the EVA on matters of density, parking, and aesthetics. We'll soon see what comprimises are struck. Ald. Moreno is convening a public meeting March 6.

HINSDALE— The batman logo-emblazoned pool along with its parent mansion is on the market in Hinsdale for $2.7M. Here's your chance to move from far-away lusting to action. We just hope the new owner will preserve the delight for its army of aerial admirers.

SOMEWHERE— The L.A.-based residential theme park developer BOOM is dreaming of Chicago locations for its LGBT-marketed lifestyle product. One of three neighborhoods may play host to an 80-160 unit vertical version of BOOM's plans for Palm Springs. When? Not for a few years.

SOUTH LOOP— In our second installment of Curbed's new Please Build Here feature, we swoop in on a very valuable, very historically-charged site in the South Loop. The spot where Adler & Sullivan's majestic Dexter Building stood until its fire-induced demolition in '06, it'd be great to see something happen here. But, given the site's precedent, we're asking for bold, rigorous design.