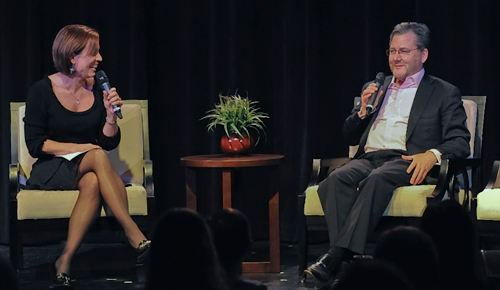 With only six months left until the closing of his eponymous restaurant, Charlie Trotter took to the stage Thursday evening at Chicago Live! at the new UP Comedy Club to discuss his impending break. Charlie Trotter’s will close in August after celebrating 25 years as a Chicago culinary landmark. “Five years of cooking and then 25 years of running a restaurant, I finally said ‘Alright, I’ve got so much brain damage it’s time for me to salvage what I have left,’” he told the audience.

Once Trotter finally gets some time off, he plans to pursue a master’s degree in philosophy and political theory. “I’ve always been a believer in studying for studying’s sake,” he said. “It’s a lost thing, it’s a dying thing ? I guess I’m reverting to my youth in a way.”

When asked if he ever considered selling the restaurant instead of closing down, Trotter said he just felt it was time for the end. He has done his thing and found his dream but “25 years is enough for one thing when you’re doing it every day.”

Trotter was also just announced as the recipient of the 2012 Humanitarian of the Year by the James Beard Foundation for his contributions, charitable and philanthropic work. “We’ve been blessed, we’ve won a number of Beard awards over the years and it’s been fantastic,” Trotter said.

It was all jokes and smiles throughout the show as he poked fun at himself, including his reputation of being difficult to work alongside. “I am collaborative as long as everybody works with me,” Trotter said jokingly. He revealed his personal saying, “Mamas don’t let your babies grow up to be chefs,” and would tell his son to “get out while you still can” if he were working for a man like Trotter.

But perhaps the statement that most symbolized Trotter’s accomplished career came from a joke about learning he was voted the second meanest Chicagoan in Chicago Magazine. “I told my team, ‘I’m unaccustomed to being number two. Next year, I will be number one on this list.’”
· Charlie Trotter to Close Iconic Restaurant After 25 Years [~EChi~]
· Beard Honors Charlie Trotter as Humanitarian of the Year [~EChi~]
· All Charlie Trotter Coverage on Eater Chicago [~EChi~]