Share All sharing options for: Inside The Amber Building; Art Deco Deathmatches; More 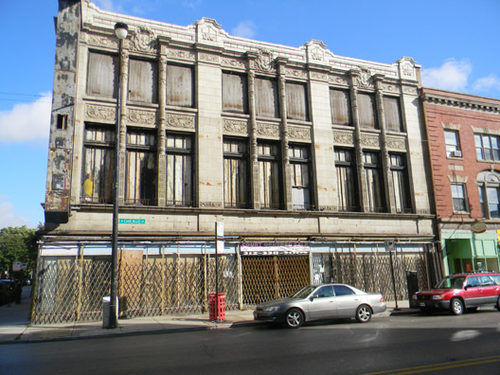 EAST VILLAGE— To follow up on October's rendering reveal, Curbed stopped by the Amber Building at 1620 W Chicago Ave to tour the active renovations and chat with project leader Kevin Miske of Building Blocks. The terra cotta-clad building holds great promise and its reuse as a small hub of design firms and restaurants is precisely the kind of demonstration project this stretch of avenue could use.

EVERYWHERE— Curbed's second run of architectural deathmatches culminated today with Carbide & Carbon being named best, purest, and most adored Art Deco building in Chicago. The competition was stiff and every round had readers making tortuous decisions. This city loves its Art Deco icons. Come relive the affair!

ELMHURST— Although entering the marketplace in late summer, Frank Lloyd Wright's Henderson House hasn't garnered much attention. Until now. The 5-bed Prairie home is currently asking $1.33M. Click through for all the juicy pics and stats!

SOUTH LOOP— In a real bummer for the South Loop, the under-construction Maxwell development at Roosevelt & Clinton has dropped residences from the menu. What would've epitomized urban-minded design with 430 apartments above 200,000 square feet of street-oriented retail will instead just be another overblown retail agglomeration in a congested big box district.