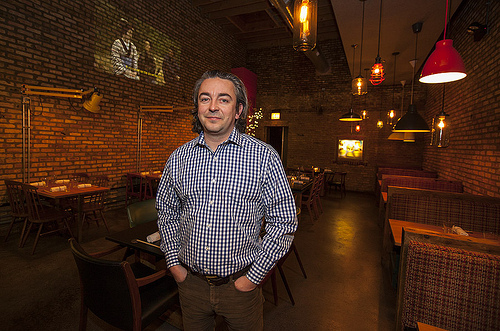 Matthias Merges is a restaurant veteran with clear visions. The New Jersey native began working in kitchens at age 14 before spending over 14 years learning from Charlie Trotter. Upon deciding to open Yusho last year, Merges looked for a departure from fine-dining with an approachable yet creative Asian-street food concept and a superlative beverage program. The Avondale location only enhanced the positive critical and customer reception, drawing business from around the city to the up-and-coming neighborhood. Opening December 2, 2011, Yusho's success after One Year In is already spawning a second location in Hyde Park.

How has the reaction been?
It's been great. We've been very very lucky with the press we've been getting and the favorable comments. We're just trying to create some great food and have favorable service and we're trying to make sure the craft of cooking and cocktail-making and the handmade environment is in tact, and with Billy Sunday we're doing the same thing, to make sure those things stay true.

Did you do anything special for your anniversary?
Actually, we really didn't. I think anniversaries are kind of overrated. We look at restaurants and the things we do like children, the first year they're still in their infancy stage. We have such a long way to go before we can actually say "hey, we've accomplished something interesting." I like the five-year/ten-year model a little better. If you can make it that long and show that you're honing your skill and keeping the environment fresh and keeping the staff educated and informed and keeping the food moving forward, the same with the cocktail program and wine program. One year goes by so fast that it's hard to judge what you've accomplished.

What do you have planned for year two and beyond?
We're looking at how our menus are set up, how we're going to offer tasting menus, and becoming a little more interesting and dynamic. We're expanding our sake and wine selection, always enhancing our cocktailing and our depth of Japanese whiskeys and things. We're still trying to make sure the food represents where we want to go and what we want to be in the future. It's easy to replicate Japanese cuisine but it's hard to be creative and have the influences of Asian cuisine but that's your own cuisine, what we call Yusho cuisine, because it's not a rip-off of typical things in Asia, it's more creative than that. We're trying to make sure we're always on that path.

What was the inspiration to open Yusho?
The space and the environment really drove the idea. I've always been interested Asian food and the aesthetics of Japanese culture and the simplicity and straightforwardness and the attention to detail. Those things have always spoke pretty true to me. At Trotter's and other places there's always been this thread that ran through the way I like to eat. And then the environment in Avondale just spoke to the utilitarian street idea where the focus on well-crafted food, thoughtful beverage program, intelligent service, were some of the things we wanted to keep constant. Even though we call it street food, there's such excitement with that cuisine that if there's a marriage between fine dining and street, and we're in that middle.

How did the Avondale location come about?
We looked for months for a location and we just happened on this space in Avondale. We looked in Logan Square, we looked in Wicker Park, we looked in Old Town, we looked in River North. There were a couple different concepts we were working with at the time we were looking for spaces. We came across the space and loved how when you walked in there was a very intimate feel and there's a second space with 18-foot ceilings that brings a whole different vibe with skylights and everything. It's close enough to the Blue Line, it's a block from the expressway, everything kind of just fit. It's close to where we live. It definitely has its challenges and we recognize that but overall we think that the concept fits the space.

Do you feel that the food and concept helped to overcome the location?
Looking at the past year, we definitely capitalized on branding. It's become a destination. It's a tough area, we're just too far for people to come down after work. We don't get the 5-6:45 crowd, except for the weekends. We get a lot of locals. People want to go home first, get changed, and then come out. If we were closer to downtown it would be a different scenario. It's a destination. You're driving there, you take the train, you get in a cab. I think it's still the same with Logan Square, even though it's the hottest area right now in the city. We think that in the next two or three years everything in Wicker Park will move north on Milwaukee.

Is there anything you would have liked to do differently in the first year?
That's an interesting question, I go through that almost every day. It's more business, the way we set things up and really understanding (that side.) We had a good idea going into it and where we would be but I think that behind-the-scenes business, I would have done that differently. Just make it more streamlined. With the economy there's things that you learn and come across to maximize your margin that we learned as we go. Coming from fine dining, that's a whole different reality than coming to a small, independent, neighborhood restaurant.

What are the lessons you've learned and the hardest part about that transition from fine dining?
One of the greatest things about coming from fine dining to a more accessible restaurant that's very spontaneous and dynamic is that you have unbelievable flexibility to change, to move, to do things that really customize everyone's experience right in the moment. Sometimes I feel that fine dining becomes the wants of the owner or chef to control every aspect of what happens which limits the ability to be spontaneous, to change things up, to offer guests a more customized experience. That's something I didn't really think would happen and I kind of love it because you're able to be on a more personal level with all your guests that come through the door. If you're able to read them and make a connection, you're able to make their experience much more soulful.

What are your plans going forward with other projects you're working on?
We're almost done with construction for Billy Sunday (3143 W. Logan Blvd.), our cocktail bar and old-school tavern, and we're shooting for the 16th of January. We were approached by the University of Chicago to come down and explore the possibility of opening a couple sites down in Hyde Park. At the time we weren't really looking for something to do but the invest arm of the university is so substantial that it was an unbelievable opportunity we couldn't pass up. We spend a lot of time there and for the past 10 years we said "wouldn't it be great to have a great place to eat down here?" There's a whole critical mass happening and the university has come across quite a bit of funds to make it more attractive and really speak to the locals, so we decided we're going to take a shot at it.