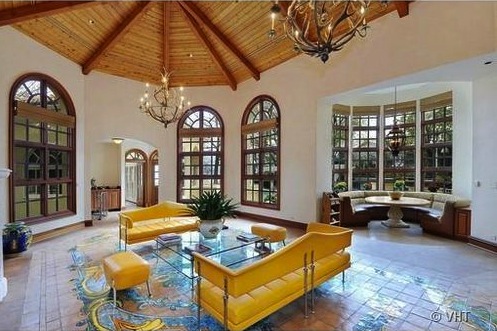 WINNETKA— The 14,600-square-foot North Shore mansion built for philanthropists Ann and Robert Lurie in 1990 has just hit the market. The 10-bed, 14-bath "Mediterranean"-style abode sits on 1.75 lakefront acres and has the company of an outdoor pool, tennis court, and guest apartment. The ask: $9.75M.

EVERYWHERE— The first round of Curbed Cup 2012 has concluded with a handful of upsets and typically intense, emotional debates. Visit the bracket to see the winners and losers and plot your course of action in next week's quarterfinals.

NEAR NORTH— A 367-unit rental tower is in early development for the corner of State & Chestnut. Inexact details have been around since October, but now Curbed has a rendering to serve up! The developer is purchasing the parcel from Loyola and hopes to begin work on the 35-story tower by late 2013.

LOGAN SQUARE— An insane Armitage Ave factory loft space has just announced itself to buyers, asking $1.3M. The central expanse is practically an airplane hangar, with an industrial skylight to boot. And then there's the smokestack stairwell leading to a rooftop terrace. Neato!