Share All sharing options for: GM Alex Smith Talks About BellyQ and BQ2GO 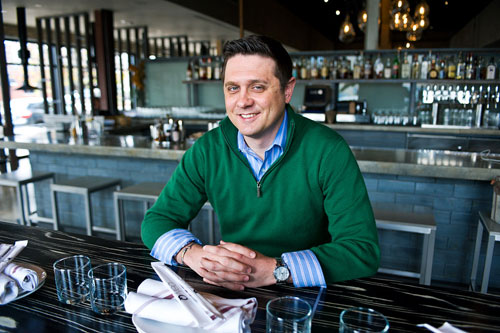 Alex Smith had a pretty windy career path before he landed at BellyQ, where he is currently the general manager. Smith originally moved to Chicago from Michigan in 2008 to open a suburban brewpub, but when the economy tanked, so did that gig. He then found himself working with Kevin Boehm and Rob Katz at Boka before hooking up with Prasino, where he eventually helped open and oversaw operations at that group's suburban Wild Monk gastropub concepts. Eventually he found his way back into the city, connected with Cornerstone Restaurant Group and Bill Kim and has been working with BellyQ since June. Here, Smith talks about the super-hot West Loop Asian barbecue spot.

BellyQ has been open a couple of months. How has it been going?
It's going great. We're an evolving restaurant. We opened and had BQ2GO and have been open for dinner. We were trying to balance our style with what the guests want. Chef [Bill Kim] wants us to be a flowing dinner experience where food is consistently coming out of the kitchen and balancing that with what the guest wants has been a little challenging. But we're polishing up some rough edges and tweaking some menu items. We have rave reviews and others that people don't get it; we're trying to figure out that happy medium. Now lunch adds a new piece to the puzzle. There's talk of opening for brunch eventually.

What's the addition of lunch been like in the neighborhood?
We opened last Thursday and we've had a lot of great feedback. It hasn't been huge crowds, but that allows us to talk to people individually. People in the neighborhood have been waiting for a lunch place in the area. There aren't a lot of places open for lunch in the West Loop.

Are people taking advantage of your take-out service BQ2GO?
It had been open during lunch, but unfortunately it wasn't everything we wanted it to be so hopefully lunch helps put this on the map, too. The idea is for both entities to help fuel each other. We're just doing BQ2GO in the daytime.

It's 8 p.m. Saturday. What's the wait for a table?
About an hour and a half to two hours.

What's the reaction you get to the length of time?
We tell people we're fully committed and tell them the communal table is first come first served. And we tell them if they want to wait and if we have any cancellations we'll try to get them in sooner. People are usually pretty receptive and we're a bit more of a destination at this end of Randolph.

How quickly does the communal table fill up?
It starts filling up anywhere between 6 and 7 on Friday and Saturday. It's more of an eat-and-go area. There are 16 seats.

How hard is it to get a reservation?
If you want the prime time, it'll be booking at least a week out in advance or two weeks. We're at about 200 covers on Friday and Saturday nights about two weeks out now.

As a customer, is there anything I can do to make my wait shorter, like cash or gifts?
[Laughs]. No. We don't accept those.

Tell me about your favorite customers—whether a specific type of diner or regulars.
The people that are here to have a good time. We have an open, warm environment. I tell my staff if we can provide a place that has good service and food that is fun and people leave having a good time, that's great. My favorite customers are the people who I talk to and ask if they've enjoyed everything and they say they've had so much fun. That's the most rewarding.

You decided to limit the wine list to two reds, two whites and a sparkling wine, all on tap. How has that gone over?
The response is varied. Some people appreciate not having a big wine list to look through. We make the choices easy. There are some people who want more and we're talking about expanding the list with some boutique wine offerings, but we don't want to journey too far away from our goal. You try to please as many people as you can, but that won't always be the case.

BellyQ got a lot of attention with Michael Jordan is a partner. Has he been in?
He was here during our friends and family [service]. And that's the only time we've seen him.

He's hard to miss so it's not like he could sneak in.
He made waves when he came in. It was fun. I did a sake tasting with him. And it's certainly not his typical restaurant. He's a meat and potatoes guy. He likes to drink big red wines and he said he wanted to try some sake. So we brought out a few bottles for him to taste. That was a highlight for me to taste some sake with Michael Jordan. It took him by surprise since sake is a bit stronger than wine. He liked it soft and round. He liked the daiginjo style, it's more pure and round.

Any other celebrities come through?
We had Alex Rodriguez come in and Jonathan Toews. Besides that it's been mainly more like stars of the local culinary world like Charlie Trotter, which was a big deal, and Jimmy Bannos, Anne Burrell, etc.

How do you deal with VIPs when there are no tables left to give?
We try to make it happen [laughs]. There are ways to maneuver the floor and we understand there will be a certain amount of cancellations or no shows. We'll offer them a cocktail and let them know the table will be ready soon. When Jonathan Toews came in, it was a friend of a friend of mine who called and said they needed a table for six and we told them we needed the table back at 7:30. They were going to the Journey concert so they were in and out quick.

What's the strangest request that you've gotten from a customer that you've accommodated?
I think it's funny that people want to come in and karaoke before dinner. And two 2 weeks ago we had a table of 26 call on a Saturday. We said they could come in by 5 o' clock and out by 6:30. They said OK and were out in less than two hours. That was a pretty funny circumstance. I was like "really, you're calling on a Saturday for a party of 26?"

What about any requests you couldn't accommodate?
I can't think of anything off hand. Maybe when a table of 13 calls and wants to come in in an hour. I think people in Chicago are pretty receptive to wanting to try different things. We do our best to accommodate dietary restrictions. Sometimes people will ask for a spirit that we don't have, but we'll suggest something else.

What's the one Gatekeeper tool you need to do your job?
The attitude that we will try to make anything happen. There are certainly people who are put off by us being so busy or our limited beverage program, but there's always options. There are no problems. There are only opportunities

When you're not at BellyQ, where are you drinking and eating?
I have a list that I'm trying to work through, but I just had a wonderful dinner at Goosefoot for my birthday. It was one of the best meals I've had in Chicago. I certainly like high-end meals and casual meals. I need to get over to GT Fish & Oyster. I love Jam for brunch. Bangers & Lace is one of my favorite bars to go to. I love a good beer. Chef Bill knows everyone in Chicago so I try to get out as much in Chicago to see as many people as possible.
· All BellyQ Coverage in Eater Chicago [~EChi~]
· All Gatekeepers Coverage in Eater Chicago