Mike Ryan's West of the Moon at Sable Kitchen & Bar

Share All sharing options for: Mike Ryan's West of the Moon at Sable Kitchen & Bar

As part of Eater's first ever Cocktail Week, bartenders at five Chicago restaurants or bars made a special limited-edition cocktail, served just this week. Today we introduce the West of the Moon from Mike Ryan at Sable Kitchen & Bar. 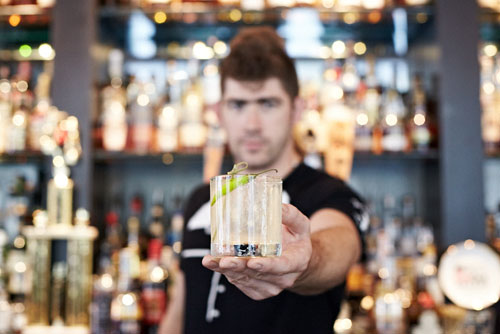 Mike Ryan is one of the most celebrated mixologists in town with a vast knowledge of modern and classic cocktails. He's incredibly inventive and he never misses an opportunity at Sable Kitchen & Bar to educate a customer or introduce them to something they may have never tasted. His West of the Moon follows suit tying together rum with a bit of heat for a perfect wintery drink.

The drink combines Flor de Cana, a light Nicaraguan rum, with cinnamon syrup and lemon with a house-made chili tincture. It's shaken and served over a large rock of ice and garnished with a small Anaheim chili, which you can eat. "The idea is that [the chile] will sit in the drink and provide aromatic complexity to it," Ryan said. "As it sits, the cocktail gets a little spicier."

Ryan said he's had the tincture for a while and just recently started thinking about how to use it more. "The idea of using spice and picante flavors in cocktails is more recent," he said. "And it's a good fit because Eater is always on the cutting edge of cocktail and food and drink news." You can check out the West of the Moon through the weekend for $13 at Sable.