Share All sharing options for: Jeffrey Wondrely's Southbound 36 at Wood

As part of Eater's first ever Cocktail Week, bartenders at five Chicago restaurants or bars made a special limited-edition cocktail, served just this week. Today we introduce the Southbound 36 by Jeffrey Wondrely at Wood. 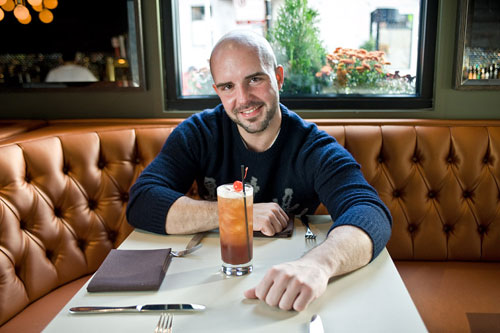 When Wood opened in the heart of Boystown in early summer, it immediately started drawing in crowds. Chef Ashlee Aubin's farm-to-table cuisine offered in beautiful yet rustic presentations was just one part of the appeal. Cocktail originator Jeffrey Wondrely crafted a drink program that took the typical neighborhood bottle of beer or vodka soda to a whole different level. His Southbound 36 continues that trend.

Named for the #36 bus that runs along nearby Broadway, the Southbound 36 is "an homage to my favorite Lakeview bus route," Wondrely said. "[It's] a truly interesting and eclectic cocktail named for an equally interesting and eclectic ride through the North Side." The drink combines Rittenhouse rye whiskey with Cherry Herring liqueur, Carpano Antica vermouth and Bitter End Mexican Mole Bitters. It's shaken gently and poured into a tall collins glass with ice and topped off with Dogfish Head 90 Minute IPA.

Wondrely said his interest in using beer in cocktails got stronger after seeing how the flavor of an IPA enhanced a chili he made. He loved the flavors and wanted to bring that into a cocktail. He added that he loves how the mole bitters give the drink a nice fall flavor and how it "plays nicely with the hoppiness of the beer."

The Southbound 36 was added to the drink list and will be on all week for $11.