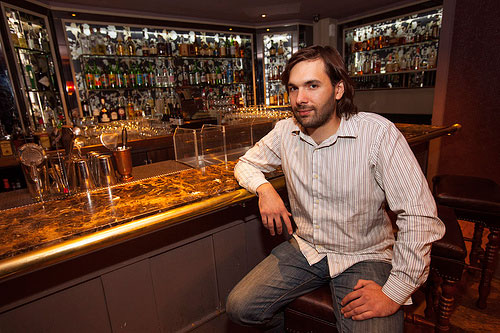 After spending nearly 15 years in the service industry, Stephen Cole was ready to make his mark and do his own thing. In opening Barrelhouse Flat after a lengthy stint behind the bar at Violet Hour, Cole wanted to take the idea of a sophisticated "downtown" cocktail lounge and put it in an underserved market. He, along with partners Ben Pritzker and Ben Lurie, opened the bi-level tavern with a focus on great mixology, a stellar beer program and quality food. BHF has become a go-to spot for not only many industry folks, but plenty of people in Lincoln Park who wanted a respite from the rowdier college-focused sports bars in the neighborhood.

How has the first year been?
It's been great. This was my first time really getting into [something like] this, but I've worked in the service industry for about 15 years. This is definitely a new venture for me. And doing the operational stuff is a new experience. I honestly can't complain.

Why did you want to open Barrelhouse Flat?
Multiple reasons. Everyone has a goal in mind when you first become a chef or bartender and there's a dream of owning your own place. I wanted to open a very user-friendly high-end cocktail bar, where you don't have to prepare yourself when you walk in the door. I feel like any other cocktail bar has dark lighting and I think the first floor is just more open. It seems to be your run-of-the-mill bar with an open kitchen. Then you look at the menu and you realize how much time and heart has been put into it.

And how did you decide to open in Lincoln Park, where there are so many college-focused bars just down the road?
Obviously the location. It opened up for us. It came with a food license and a late-night license. It was a turnkey operation. In Lincoln Park, I don't have any direct competition. Every other place has a TV and if you walk down the street, there are multimillion-dollar houses. We're not trying to turn anyone away, but it's more of a place for foodies. You have either really high-end restaurants in Lincoln Park like Alinea or Boka or places like Wiener's Circle. There's nothing in between and we fit that niche. And our beer program also rivals some of the other top beer programs in the city so we're not pigeonholed as being just a cocktail bar.

Does it feel like it's been a year?
It honestly feels like this place opened just yesterday, but at the same time feels like it opened five years ago. I'm here every day, so the pace is different in that way. But then again I can remember me being behind the bar setting up for training and seeing all these young eager minds wanting to learn more. And seeing where they are now, it's pretty cool.

How was the actual opening? Were there any memorable screw-ups or did things go smoothly?
Oh Ari, there are screw-ups every day of my life. [Laughs]. In comparison to other openings I've been a part of it went really smoothly. I lucked out in that I feel like I have one of the best staffs in the city. They made it really easy for me. It was one of those things where you take off the training wheels and let these guys do what they do.

Did you make any big changes during the first year?
We're constantly evolving as far as our program and what we're playing around with. You never sleep when it comes to creating. When it comes to major changes, we have a new chef, Erik Chizeck, which is a big deal. I've known Erik for a while now. He's been at Sepia, Moto, Saigon Sisters and Bedford. We had an unfortunate incident with our old chef and he shattered his leg in a skiing accident. We love and miss him. He had to move back to Arizona and is doing better now. Erik came in and it was kind of a funny thing. We were planning on revamping the entire menu the week after our old chef went on his ski trip. We really wanted to get more substance with more sandwiches and have more things that were seasonal and local. We didn't have the staffing where we wanted in the kitchen. Now we do. Erik's been with us about four months and we have a new kitchen staff, too. One of the guys was the sous chef at Scofflaw and another from Longman & Eagle. The talent has skyrocketed. We're looking forward to new changes.

Other than the professional side, how has it been emotionally having your own spot?
Exhaustion is an understatement, but it's great. It's one of those things that I've wanted a long time and one of the things you don't realize until you're in it, but with Barrelhouse Flat there are so many moving wheels. It's on three floors where anything can happen at any time with plumbing, electrical, etc. It's stressful, but when you see smiling faces come through the doors it makes it worth it.

What's been the best part of having Barrelhouse Flat?
I feel like anyone who is lucky enough to work in the service industry where you can wake up and know your job is to make people happy, that has stuck with me. When I was over at Publican one day, when I worked with Terry Alexander at Violet Hour, I looked across the room and there were 150 people laughing and having a good time. I wondered if Terry realized that he makes so many people happy every day. And that stuck with me and that's what I wanted to do. That keeps me on focus as to why I did this.

And the worst?
Lack of sleep and stress.

Any plans for another tavern?
Possibly. I have a couple of concepts I've been working on and I'm just talking about how those might be received. But we're just constantly evolving and coming up with more ideas.