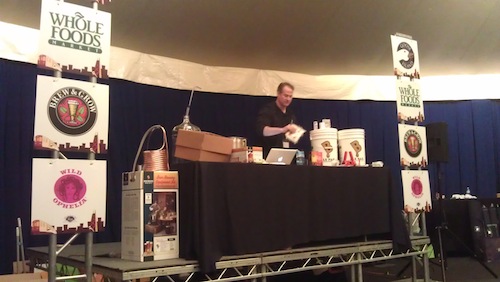 Craft beer lovers packed the tents over the weekend for the third annual Beer Hoptacular. The event was host to dozens of local and national breweries who were on hand offering more than 100 types of craft brews. This year's venue was the Riverfront Theater downtown, a step up from last year's spot at the Aragon Ballroom. With the vendors stationed in a circular layout inside the 20,000 square-foot air-controlled tent, the move had a clear positive effect as lines and wait times were noticeably shorter. Attendees had more room to move from booth to booth and generally the space was able to accommodate the large crowds and avoid the congestion of years past.

In addition to the larger venue, Beer Hoptacular was spread over two days and three sessions this year giving enthusiasts more chances to attend. And despite the bigger turnout, the breweries were able to keep the taps pouring throughout the event as there seemed to be very few beers that ran out, even well into the final session on Saturday night. Chicago breweries were well-represented with Piece, 5 Rabbit, Revolution Brewing and Half Acre just some of the names on hand serving their signature drinks. Others used the event as an opportunity to tap kegs of special, limited beers that would otherwise be difficult to find.

For those who wanted to learn more about beer, there were also several demos that took place in the smaller tents outside. Sam Adams and Weber Grill teamed up for a 'Cooking with Beer' demonstration; Goose Island and Whole Foods sponsored a pairings class with samples of beer, cheese and chocolate; and Brew & Grow gave a lesson on homebrewing by showing how to replicate Bell's Two Hearted Ale using home equipment.

Throughout the event, attendees were asked to vote for their favorites and the results were revealed at the end of the night. Chicago's own 5 Rabbit took first place with its 5 Lizard beer, followed by runner-up Lexington Brewery's Kentucky Bourbon Barrel Ale and Ommegang's Art of Darkness rounding out the top three. With the brewing scene here continuing to grow, this year's Beer Hoptacular was the biggest to date and it looks like it has no plans of slowing down. There was something for everyone—aficionados and beginners alike—and at its core it was really just a celebration, a celebration of craft beer.