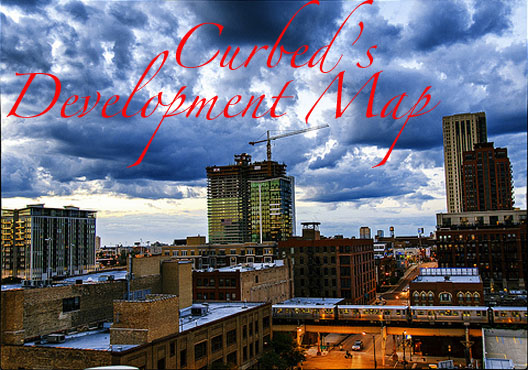 EVERYWHERE— With the autumn surge in building construction, we decided it'd be clever and quite sensible to mash together the major projects underway around town in a compact development map. But it's just a start. We'll be periodically updating the map in an effort to keep it current.

SOUTH LOOP— In other development news, the planned Cermak/McCormick Place Green Line station has been rendered into the light of day. Mayor Emanuel released the image while at a press conference touting a package South Loop infrastructure initiatives. Sorry we missed all the glad-handing.

KENWOOD— The one-time Kenwood home of the Pullman Neighborhood's lead architect showed up on the market this week. The sturdy colonial revival is more reminiscent of Solon Spencer Beman's Christian Scientist church designs than his Pullman row houses. Which makes sense, because the man was devout and had the funds.

EVANSTON— Everybody give a warm welcome to new Curbed contributor Arabella Watters. In her first piece, she checks in on the varied construction happenings on Northwestern's Evanston Campus. The biggest building to have broken ground recently is the Goettsch Partners-designed Bienen School of Music, clutching the banks of Lake Michigan. And set to spruce them up quite nicely, we should add.