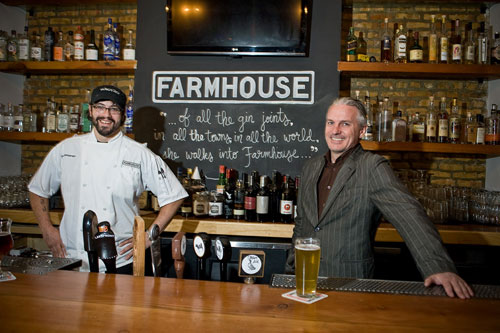 Farmhouse didn't expect to have such a quick impact on Chicago. But when it opened a little more than a year ago, people starting flocking to it. Where owners Ferdia Doherty and TJ Callahan thought the large Midwestern craft beer selection would draw people in and then they'd get introduced to chef Eric Mansavage's local, farm-to-table cooking, it turns out it was the other way around. And then they added a great cocktail program inspired by gin and a year in, people are still coming. Eater chatted with Doherty to dig in and see how the first year has been.

How has the first year been?
It's been phenomenal. We anticipated a kind of nice ramp up over a number of months and we got hit really hard from the beginning. It was crazy. The first three months is always crazy and it was rocking. We learned a lot by a lot of mistakes.

Why do you think it was such a hit so quickly?
People ask me that all the time. It was a combination of the food we're doing—simple Midwestern fare, locally sourced, grass-fed beef, etc. and the space had a good aura when you walked in. Nothing had worked in the space, but the combination of food, space, ambiance ... and the area was crying out for something like this. The whole philosophy was to bring people in with 28 craft beers and surprise them with the food. But they came for the food and got surprised by the beers. The opposite thing happened. That's been a real fun part from the beginning.

Why did you want to open Farmhouse?
Initially, TJ and I met three years ago. I owned a design/marketing company and TJ was in the restaurant turnaround business. He was [working with] a group of Irish pubs and he hired my company, because I'm Irish. I helped Billy Lawless and designed his logo at the Gage. He's been a good source of education and inspiration for my first restaurant. TJ and I kept talking. We got along well. We have a different set of smarts. We initially wanted to buy Hopleaf and asked Michael [Roper] and he was like "are you kidding me?" Then we kept talking. We landed here, but it wasn't our first pick; it was where 25 Degrees is. But we kept coming back to 228 W. Chicago and it felt right and took a chance on this one.

Does it feel like it's been a year?
I feel like it's been one week. It's gone soooo fast and it's a constant ... when we bought the place, the kitchen is tiny. For what we do, everything apart from our bread is from scratch. We built a prep kitchen in the basement and there were a bunch of old building problems that we knew we had and were going to fix. It's been a constant craziness. The one really lucky thing for us is the people we have. We have probably kept 95 percent of the staff from day one. That's what really makes the space. That's been one of the highlights of the year is that the staff keeps coming in and liking it—they actually like coming to work everyday. I say "if you don't like coming to work, find a job elsewhere. That's what I'd do." We hired personalities. You can't train a personality.

How did you come up with the concept of "farm to tavern"?
Really ... it's not a new concept. In my mind, Chicago was probably doing it in the '20s and '30s where they had a garden in the back and made their own food and everything came from within 50 miles. We wanted a good local craft beer program ... and the food as much as we can, but in January it's hard to get good tomatoes. The concept really started as a craft tavern and then we honed it to the four states that touch Lake Michigan and said "Hey, this is a good idea." The craft beer world was moving in a nice direction for us as well with the addition of places like Greenbush. And our chef is from Stevens Point in Wisconsin and has an interesting background as far as family; it's a polish American family. He brought a good Midwestern sensibility and we liked that. There was a sense when he walked in the door that he was our guy even before we talked to him. The energy was right I have learned so much from that guy. I'm really happy to call him our chef and a good friend.

How was the actual opening? Were there any memorable screw-ups or did things go smoothly?
[Laughs]. Oh boy, many a story. The first thing was TJ and I have very good discussions and TJ is a little older than I am. I'm from Europe, He's from Boston. We both have that strong Irish fighting spirit. He's the seasoned restaurant guy and knows more than I could ever know about the business. I am the idea guy and throw ideas out and his eyes grow bigger every time I open my mouth, but we always end in a good place. One of the funniest things we did in the beginning was I was talking against Open Table. I thought we could control it all on our own. With my background, I think less is more. We haven't done any advertising. I said we're going to do no marketing except when people walk in here, we'll make sure they leave really happy and they'll tell five people. But it's worked. You can never make everyone happy. Luckily we've had really good experiences with people. We got hammered in the first three weeks because when we brought in Open Table, we didn't know how to utilize it properly. We'd have 100 people show up at once and we'd have to find seats for them. It helped us because we became really good at doing big parties, because we had to. We were doing almost 300 covers on a Friday night. I think the Open Table thing was the right way to go and it was a smart move on our behalf. But we got nailed so quickly and it was chaos.

We've seen Adam Seger there behind the bar on occasion. What's his connection to Farmhouse?
Adam and I go way back to my design days. We created Hum together. I came up with the name and the design. My friend Darrel Jursa was the operations guy. We created that a number of years back and that's how I met Adam. He's been a good friend since then. Prior to us opening, he helped me understand how to set up a bar properly and what type of people to look for. We initially weren't going to be a cocktail bar. But then we decided to go left when everyone was going right and said, "Let's do gin." It's like 5 percent of our sales, the gin cocktails. Adam has been a good sounding board and helps when it comes to changing cocktails.

Other than the professional side, how has it been emotionally having a small neighborhood restaurant?
Very tough considering a couple of factors. I have two small children. One is just turning 2, my daughter is now 4. My wife, Nora, (who is also a partner) works at the Art Institute. And we're trying to sell our house and move so there's a lot of things happening at the same time. Emotionally there were long hours: late hours, early mornings. It was tough on my wife having to pick up the slack. But we knew going into it that the first year was going to be really hard until we had our feet in the right place. Aaron Steingold came on about a month ago (as general manager) and he's taken a weight off our shoulders. He's brought a lot of professionalism and we can take some time off now and spend time with our families. It's been an emotional roller coaster. But for me it's been exciting and I love the hard labor of it. The neighborhood people have been fantastic. And about 70 percent of the people who come in here are women.

What's been the best part of having Farmhouse?
Lots of good parts. But I think it's just the people. It's a really interesting world to live in. Coming from a marketing/advertising background, here you're dealing with multiple personalities daily. And just our regular customers who love the place, some who come in three days a week and have dinner three days a week, which was surprising to me in the beginning. But we keep getting better everyday and improve the food, drink, service and everything else. It's been a wonderful experience starting a new company.

And the worst?
Time away from my family. That's pretty much each. There hasn't been much of a bad side apart from that.

You guys often hold special dinners, but one that stood out was the homage to Traverse City, 1974. Was that a dig at Next?
It actually wasn't. I love Next and they do an amazing job. Because we were a Midwestern tavern we came up with the idea one day and said we're going to do a dinner from each of the four states. First city we picked was Traverse City. It was also a little bit of an April Fools to Grant [Achatz] and Nick [Kokonas] but then it rolled from there. Chef and I went to Traverse City, ate in the restaurants, met some fantastic people, visited wineries. And we sold it out overnight. It was a 12-course seated dinner for 85 people. It was challenge coming out of our kitchen. We did one or two after that, but then started doing more of a five- or seven-course. The 12-course was a little much. One of the ideas moving forward is to have a dinner for line cooks of Chicago, a dinner for kitchen folk, where they come to Farmhouse for a Sunday supper and put on a spread worthy of any comida in Chicago and have fun with our fellow kitchen workers. And it's to bring that world together; that world here really plays well together. Jared [Van Camp] at Nellcote and Dirk [Flanigan] at Henri have been a great help. It's a great city for that. It's our way of saying thanks.

Would you do that for free?
No, but we'd only charge like $20 or $30 and throw in a couple bottles of nice whiskey.

Any plans for another restaurant?
The goal was to take Farmhouse as it is and bring it to another region whether that's in Chicago or not, I can't say. The goal was to take it to each of the four states and do one in Wisconsin, Michigan and Indiana. Nothing has been signed yet. If it does happen, it'll be a big change and we're back in the fire again.