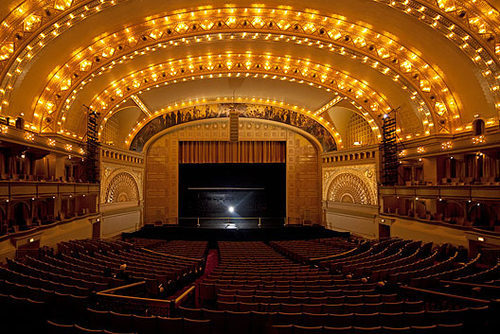 EVERYWHERE— We really sunk our teeth into the Open House Chicago architectural lineup this year, and the week's content reflects it. Pore over Curbed's wide-ranging tours, which included Frank Lloyd Wright's Charnley-Persky House, the Auditorium Building, the brand new Logan Center, and The Powhatan Apartments.

STREETERVILLE— With momentum turning in favor of Northwestern in recent days, some sort of bold statement was needed to buttress the preservationist cause in the battle for Old Prentice. That came Wednesday when Jeanne Gang rendered a fantastical cantilevered tower crouched over Goldberg's Prentice Hospital. Publicity stunt, practical proposal, or a big middle finger? You decide.

HYDE PARK— Carol Moseley Braun finally sold her "Professors Row" home this week, after two-and-a-half years spent on the market. In recent months a threat of foreclosure loomed, which undoubtedly kicked the effort into another gear. Thus, the 5-bed charmer went as a short sale for $1.2M, a loss of $500K over Braun's 2006 purchase price. Hey, foreclosure would've been far worse.

LAKE VIEW— Emerging from the development deadpool is a mid-sized proposal for studio apartments at Broadway and Diversey. The plan already has its approvals, from 2007, and is really just an expansion of the larger 600 W Diversey apartment building. But it'll surely help to visually tighten this most chaotic of intersections.