Grant Achatz's Note to Self

Share All sharing options for: Grant Achatz's Note to Self 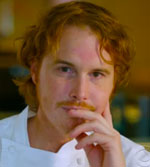 People talking to themselves might seem a little crazy. But on CBS This Morning, Grant Achatz has a nearly five-minute chat with his younger self to talk about his future, career, battle with cancer and more. He tells himself, who thought he was going to be an architect or engineer, to work hard, embrace those around him and push himself to his limits. But the most poignant line may be when he says, "Stay humble. And remember ... you're just a cook." [CBS]