Share All sharing options for: Three Years and No Movement on Rebori-Designed Triplex; New Possibilties for Defunct Waldorf Site; More 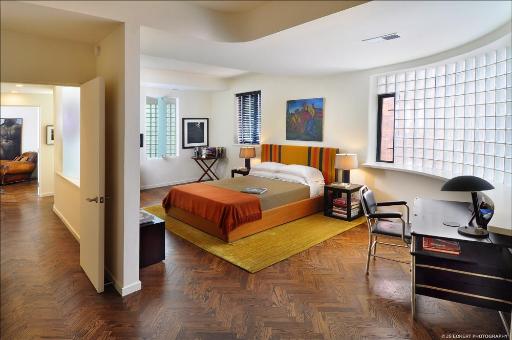 GOLD COAST— For three years and counting, the sole renovated triplex at Andrew Rebori's Fisher Studio Houses has languished on the market. One thing not so stagnant is the price, which has withered to $1.239M from an '08 high of $1.675M. A good deal on an outstanding property.

STREETERVILLE— In the wake of 2009's scuttled 107-story Waldorf Tower, comes a fresh (yet somehow quite stale) rendering of a 50-60 story building on the old Waldorf site near another canceled tower, The Spire. Not many specifics are available yet, but the architect is Solomon Cordwell Buenz, the building's blue and glassy, and parking will be underground- a rarity for new Streeterville construction.

OAK PARK— George Maher's Erwin House is on the market for $1.8M. Just so happens, the seller is former Channel 5 news anchor Zoraida Sambolin, splitting town for a CNN post. The Erwin House, a distinctive composite of Prairie and Arts & Crafts influences, was built in 1905, as Maher was moving confidently into his own.

ROGERS PARK— This Queen Anne really pours on the charms, even before you factor in the spacious live/work garage. Yours to utilize as versatile workspace or as spillover capacity for raucous parties, it could also equate to extra rental income. Originally asking $435K, the price has dropped nearly $100K to $338K.