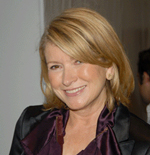 Martha Stewart is going away, but thankfully this time it's not back to jail. According to the New York Post, the domestic diva's six-year-old Martha Stewart Show, which moved from syndication to the Hallmark Channel in 2010, will cease airing new shows at the end of its broadcast season in April. Despite winning two 2011 Emmy Awards, the show's ratings were too low to keep it afloat. Apparently the show is planning a big Oprah-like sendoff. Party on. [Eater National]