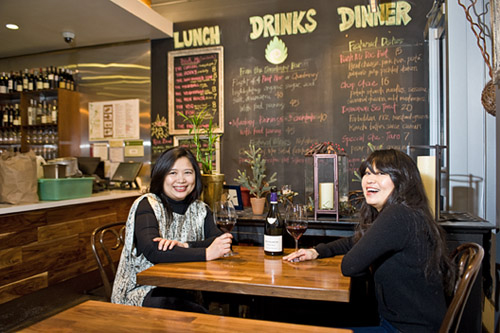 After leaving her cushy corporate gig with Proctor & Gamble following 20 years, Mary Nguyen Aregoni took a gamble on first opening a banh mi stand at the just-opened Chicago French Market and then a bigger risk on opening a full-on restaurant around the corner in the West Loop. Saigon Sisters debuted beneath the Lake Street El tracks on Oct. 3, 2010 and the ride has been an adventure, to say the least. At first, Aregoni feared no one would come, but when the never-ending lunchtime rush ushered in about 300 people in three hours on the first day, she knew she had a winning idea. But with wins come losses, which happened when opening chef Matt Eversman left, but Aregoni kept looking forward, hired on new chef Matt Riordan and hasn't looked back once. She discusses the excitement of Saigon Sisters first year and how it really is a family affair.

Congrats on the first year. How does it feel?
Pretty good. It went by really fast. I think it's a lot of learning in one year. It's like a roller coaster ride for someone new to the industry. It's not dull at any moment for sure. It's actually fun, I like it. [laughs.] People say I'm crazy for being in the restaurant business and I know what they mean.

How has the first year been?
Luckily I had some experience with the French Market to help me get my feet wet and to open up a place and be in the industry. It helped to prepare for this. I was able to serve 200 people a day and now we can do full service. I felt like dinner was so much more work with so many more people you have to hire, you deal with chefs, PR and a lot of things that you don't have to as much at lunch. It's what puts your name on the map. There's a model that works for people who want to make a lot of money at lunch and expand, but at dinner it's a totally different mindset. I learned that if I'm going into the restaurant business I have to go into it full force and have a really great place for people to eat where I'd like to go. With that in mind, I invested a lot in the ambiance, the food, the people I hired. It takes several tries to get it right. I'm really happy with where I am right now, but it's a constant change. It's different from the corporate world. I worked at P&G for 20 years in marketing and IT, where it's pretty steady. Here it changes daily. You're always fighting fires and issues. It's more fast paced and stressful.

Does it feel like it's been a year?
It feels like more than a year. It went by so quickly. Sometimes I forget when I started this business. It feels like two years.

Why did you decide to open the full restaurant so close to the stand at the French Market?
The location of the French Market is only 200 square feet and they only allow me to have electricity and a convection oven and two burners. What I wanted to do, I had to have a kitchen rental and it was a logistical nightmare. I needed a place close by where I could cook and transport food. This place was close and convenient. I thought I was only going to do lunch, but it's such a cute space I thought I'd experiment with dinner. We tried breakfast when we first started but realized it wasn't a good idea when you're between Dunkin Donuts and Starbucks. It helped me to learn how to manage projects and market the business.

You had some big changes happen when Matt Eversman decided to leave. How did that affect the business?
That was a big learning [experience] for me. When I hired Matt he was new into his role as executive chef and I was new in the industry. I put trust and faith in him that he'd grow with us. It's unfortunate that he got caught up with the name of Breakout Chef [by Time Out Chicago]. He should've been up front with me, but I didn't expect he'd want to do something so soon. It was unethical and I had to fire him. He was doing it behind my back in my restaurant. I didn't want him to use my establishment for his tastings for his investors. I felt he needed to learn quickly that's not how it works. He was sold on new ideas and a lot of stuff. My first year, that was my first drama. I was like "Wow, thank god I caught it early." It was a quick learning experience, but I feel that you deal with it and move on. If there was anything in the first year I had learned was that there were people who weren't honest and ethical. Thank god it didn't affect us too much. My sous chef, John Boisse, was amazing. He's been with me from the beginning and stuck with me. He's young, but has a bright future.

It's Saigon Sisters, but your sister, Theresa Nguyen, lives in New York. Is that difficult?
She lives in New York and she comes here and helps me out. She comes every month and she goes back and forth. She's unemployed from her fashion design world and is trying to figure out what's next besides helping me. She's liking what I'm doing and she's getting more involved and interested and setting the creative direction of what I'm doing. She's my pulse in New York and does research for me.

So is she your partner or is it really your business?
I'm the sole proprietor, but it's more of a family business because I want her and my mom to be involved. I want the name to be something with that. It's all of us.

Looking back, how was the actual first day of opening? Did things run smoothly?
In the beginning because we were open for breakfast and lunch, we were nervous because no one was coming. We were scared it was going to be a bust. Then lunch hit and we had people out the door and it was like 300 people in three hours or something. It was amazing. It gave us a boost that people were looking forward to us opening even though we were half a block from the market. The POS system went down and people were still training. It was chaotic, but it was fun. I had all of these tickets in front of me and all I could do was laugh. People were so understanding and supportive. I don't know that I'd get this kind of reception in New York. People here are so nice. It was chaotic, but was a strong beginning. We opened dinner about a month later. It was different because people didn't know to come for dinner. It was a little nerve-racking for dinner. We had to do a lot more to get our name out there.

Do you think you'll open more restaurants?
They say that once you have one restaurant, you'll have more. I'm a business person and I learned that you maximize your locations and if something is working you need to replicate that. I'm in it for the long run now. I really like it. There's a lot of available room for this kind of food that we're doing. I want to really make a name for myself in Asian restaurants with good food and authenticity.

What's been the best thing about having the restaurant?
To see my mom and my sister and my husband working with me along the way, especially my mom. She's 75 and she's in happy land. She looks forward to getting up every morning. This is what she knew in Vietnam. She worked hard with my grandma in the market and had an entrepreneurial spirit. To see her happy and like that is rewarding for me. And to see how this can affect people's lives, like my workers, where they can do so much and improve, it's more of a human development thing. [The best part is] the connections with the people and I'm closer to my mom than ever.

For more One Year In posts published today across the Eater Universe, head over to Eater National.