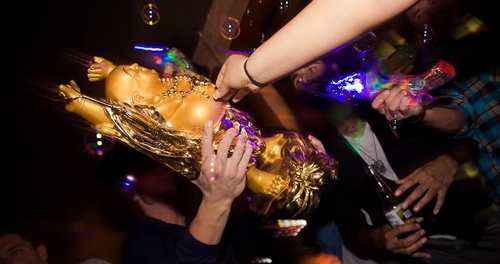 If you've ever ridden the elevator up to SushiSamba Rio's tropical third floor lounge, you likely noticed the golden Buddha statue sitting in the elevator acting as your escort. But sometime in November the Buddha was snatched, which couldn't have been an easy feat since it's a couple of feet tall and weighs a bunch. But the elevator sits just off the front door so it's possible someone could have quickly run out with it.

Since its disappearance, the Samba Buddha has been spotted all over River North at various clubs. Word is the statue was last seen at an industry event at the Underground, according to SushiSamba GM Adam Feichter.

"Since this tragic occurrence over a month ago, the Samba Buddha has been spotted around River North," Feichter said. "He has been at the clubs, on the new restaurant row on Hubbard Street and everywhere in between. I even hear he has his own Facebook site. He must be enjoying all things Chicago, but some say after eight years he must have needed a vacation? I don't buy it."

The restaurant is hoping to get the statue back to again serve as the elevator escort to the recently revamped upstairs lounge, which is open through the winter each Thursday through Saturday starting at 8 p.m.