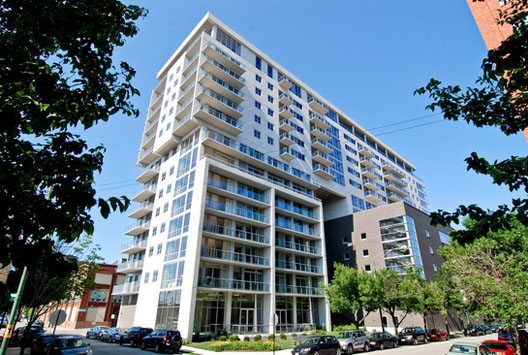 RIVER WEST— The Mondial Chicago at 900 W Huron faltered as a condo building, going rental last Spring. The 124 developer-owned units changed hands and started to rent, pretty successfully. So it's an interesting experiment being tried, teaming with luxury deal site Gilt City to rent the few available units. The deal is no joke: 2-beds at $2,600 for the first three months- a savings of $5K. It's what we call an adventure in marketing.

LAKE VIEW— Up high in a lakefront building built by famed Holabird & Root lies the "mansion in the sky", a favorite of ours at Curbed. On the market for nearly a year now, the ask has dropped considerably and we'd like to know why. Speculatively, going without realtor representation may seriously hinder its exposure, and also might help explain the owner's enthusiasm for the pricechop.

STREETERVILLE— Curbed checks in on what it takes to rent a high-floor condo at The Elysian. The answer? $14,000 a month. That is, if you absolutely require three bedrooms, two balconies, and a chef's kitchen. At least there's full access to hotel services, among the best in the country.

UPTOWN— Gone are the exuberant days of booming construction. Among the countless failed developments an 18-story condo project in Uptown, notable for its ties to tainted developer Salman Ibrahim, left standing a vacant five-story building. Just so happens that the Chicago Lakeshore Hospital would now like to fold said property into its expansion plans. Hospitals are doing just fine.