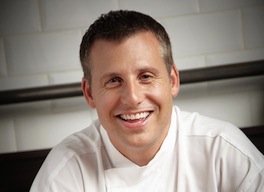 Charlie McKenna grew up in a Southern home, where they ate Southern food with a big Southern family. Despite going to the Culinary Institute of America and working at some of the best restaurants in Chicago (Avenues, Tru), he has barbecue in his blood and came back to his roots when he opened Lillie's Q in Bucktown in late July of 2010. McKenna never sought to have a nationally acclaimed spot (Food & Wine named it one of the best barbecue joints in the country earlier this year), but rather wanted a relaxed place where people could come eat the food he grew up making during summers at his grandmother Lillie's house. Yes, that Lillie, and he is a good Southern boy paying homage to his grandma. And maybe that's why he's had a pretty great first year.

Why did you get into cooking and want to open Lillie's Q?
My first experience with cooking was with my family. My parents are from Greenville, S.C., and my grandmother stil lives there. We also had family dinner at home. When I'd go to my grandmother's house every summer, they would do a lot of cooking. That was my first exposure to family-style southern cooking. My dad was also in the military and he would cater barbecue on the air bases as a hobby. When I was 12 or 13 we did a dinner and it was tri-tip and that's where that comes from on the menu. We did a dinner for about 700 people. Food has always been a big part of my family. I went to Florida State and I decided to get a degree in hotel management and then to the CIA.

You had more of a fine-dining background. Why the switch to barbecue?
I really enjoyed the fine dining aspect: the attention to detail and the exactness when you're doing a 10-course meal. When I was between Florida State and the CIA, I lived in Greenville for 3 months. One weekend, there was a barcecue compeition nearby and [my dad and I] decided to go there. When we walked in, there were 40 to 50 teams and all these guys with rigs and trailers. We said we could get into this. That was our first dabble into the barbecue thing.

So what happened then?
We started entering contests and didn't do so well. Then we really got into it and it turns you on and you become better at what you do. We went to [the World Championship Barbecue Cooking contest at] Memphis in May in 2005 to check it out. We met a lot of people and the community ... there's a lot of teams, but it's really tight knit. Then I came up to Chicago, but we were still doing the competitions. I made the sauces and rubs for that. Then we started winning and I decided I enjoy fine dining, but when I can walk around in jeans and flip flops and have a good time and make a decent living, why spend so many hours in a kitchen?

Yeah, just slightly more laid back.
It's a much better lifestyle. It's so much easier and more fun for me when I can walk into a restaurant and talk to the guests. People are so enthusiastic about barbecue and it's fun to talk to people and hear their stories about barbecue. It's a fun atmosphere.

So how has the first year been?
In one word: crazy. I never expected it to jump off the map like it did. My plan was to open this nice restarant and be busy and pay my bils and now it's gone to insanity. There's sometimes a three-hour wait for a table on a Friday and Saturday. I never thought it would get to that level. You never expect that many people to come in and enjoy it. When you cook food, you're a part of people's lives. It was more than I ever expected it to be, by far. Some days, we'll sell 100 racks of ribs in a day. It's been a lot of fun. It made the year fly by pretty quick.

So it doesn't feel like it's been a year then?
It doesn't actually. It seems a lot shorter. The opening seems like it was yesterday. I can't believe it's been more than a year. It definitely does not seem like a year; more like three or four months.

How was the actual opening? Were there any memorable screw ups or did things go smoothly?
The friends and family [dinners] were all pretty smooth, but the first night was pretty rough. It was a lot busier than I expected it to be and we weren't ready for that experience. When you go to an establishment that's more rustic, people tend to think because it's barbecue that it should be ready and come out in 10 seconds. I think we got hit way harder than I expected. At Tru or Avenues we'd do 10-course meals for 150 covers. But I wasn't ready for the pace that first night. It set me back a little bit, but we've changed that around quickly and people are loving the restaurant. It's all about making adjustments. That's the fun thing about a restaurant—it's the same business everyday, but it's never the same business.

Lillie's Q opened during a big barbecue boom in the city. Why do you think so many spots opened and how does it make you feel to see so many people enjoying barbecue?
Part of it was tough because I'd been planning this restaurant that I named after my grandmother for probably three years before we opened. I had investors who backed out and then three of my friends said they'd put up some of the money. At first, when I started seeing these places open I felt it was unlucky, but with barbecue there's a lot of different styles and nuances. There's a lot of people who are passionate about barbecue in America; it's the only real traditional cuisine we created here. The cool thing is that we all have a different style of what we do and there's a place for all of us. I hope everyone does crazy business. It's fun to be part of a boom that brought barbecue back to Chicago.

Food & Wine named Lillie's Q one of the best barbecue joints in the U.S. Do you remember what went through your head when you heard?
I was proablay in shock. I was like, "Are you serious?" I know Food & Wine contacted my PR guy to ask for some pictures and we didn't know what they were talking about. When we got the article, I was in utter shock. We were put in a level with some of the best restaurants in the country. Some are friends of mine from the competition circuit and I've eaten in some of those places and it was an honor to be placed in the same league. But it was also very exciting.

Do you feel added pressure now?
There's pressure everyday, more than it was opening the restaurant. Now it's living up to those expectations everyday because my name is on everything that goes out. That's pretty intesnse. But I like the pressure.

What's the best part of bringing your family traditions to the public?
The best part is that people in Chicago get to experience Southern food. I know people who've never been to the South or eaten in the states where I grew up. It's great to bring a region of food to Chicago and let other people experience that. It's like I'm bringing you to my house for a Sunday family dinner. I like that atmosphere and that's why I'm in the restaurant business. I like to cook and put on a show and cater to people. It shows what my family was about and my traditions, but also what the South is about. It gives a little light into families in America and how we were always proud to come together and cook together.