On Tuesday night, after the last diners were served, Eater hears the entire kitchen staff of The Black Sheep walked out on chef/owner James Toland after Toland apparently fired both chef de cuisine Phil Rubino and pastry chef Sarah Jordan, according to a member of the staff. Eater, however, could not get confirmation from either of the chefs, but word is they were let go to help reduce employment costs and not due to their performance or abilities. A few days ago Toland apparently asked some of the line cooks to take a pay cut, but only after he allegedly told a server he was "going to wipe out the back of the house (kitchen) staff," according to the source.

Talk of a potential walkout has been circulating for about two weeks, even prior to GM Michael Simon leaving his position, and in that time, the troubles for the restaurant have seemed to escalate. Last week, Time Out Chicago gave The Black Sheep a two-star review and then someone posting as "Chef James Toland" wrote some scathing comments on the magazine's website. Toland claimed he was "hacked," but the staffer who told Eater about the walk out said Toland gloated to his staff about posting the comments on the TOC site.

Then, last Saturday, the restaurant posted a series of tweets tagging a number of local journalists (including Eater editor Ari Bendersky) inviting people to come in for dinner and get 20 percent off if they mentioned one of the journalists' names. In a message to Eater, Toland said it was his assistant who posted those tweets, that she was new to the social media world and didn't know the rules. He then immediately took to Twitter to apologize and removed the tweets (see screen grabs below for example). But when asked about it, the staff member who alerted Eater to the walkout said Toland doesn't have an assistant and does the tweeting for the restaurant himself.

The Black Sheep has been open just shy of two months and as of press time Toland had not responded to requests for comment. 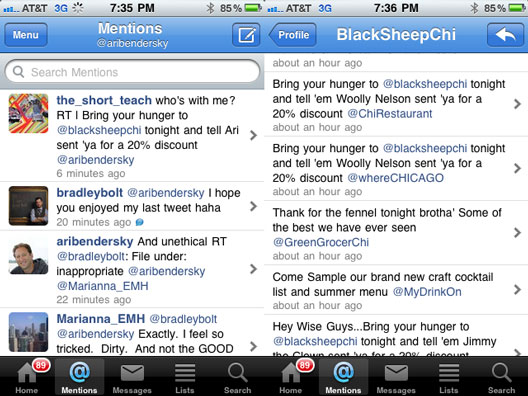