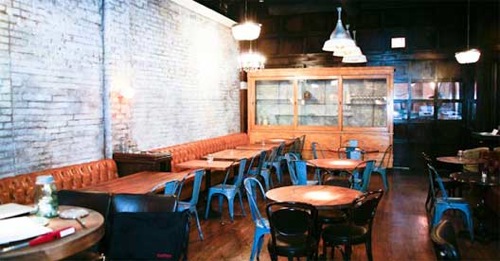 Either restaurant thieves have been quiet lately or restaurateurs haven't felt the need to report things gone missing, but it's been a few weeks since we've talked about Shit People Steal. But that ends today. Eater got an email from Brendan Sodikoff who said a number of things have gone missing from Maude's Liquor Bar and Gilt Bar, two of the restaurants he owns in the West Loop and River North.

Instead of us telling you what has gone missing, we'll let Sodikoff recount the things that have slipped out of the restaurants, but hardly have gone unnoticed.

All time favorites at Maudes and Gilt bar:

· Vintage 40-pound record player was stolen during a Saturday service at Gilt between 7 and 9 p.m. A pretty amazing job. I still don't know how they did it.

· A vintage porcelain hand we had business cards in.

And my personal favorite.

· Soap and lotion from the men's bathroom. WTF! Rarely the women's, but the
men steal it on a weekly basis!

If you are a chef or restaurant owner who wants to tell your story, drop us a line. We'd love to hear it.