Share All sharing options for: Workers Stabbed at Chinese Restaurant 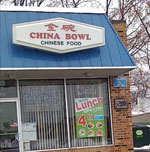 An argument between a cook and co-workers at a suburban Chinese restaurant led to the chef stabbing the other people. Chicagoan Xiubin Mei, the 60-year-old cook at Elk Grove Village China Bowl restaurant, is charged with attempted murder and aggravated battery. Mei got into an argument with two workers on Monday around noon, grabbed a knife and reportedly stabbed the two repeatedly, according to Sgt. Nick Olsen. The workers were treated at a nearby hospital and released; Mei is scheduled to appear in bond court today. [Tribune]