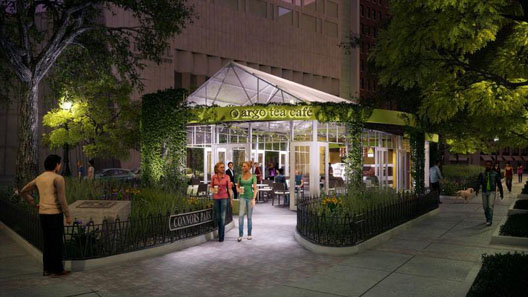 GOLD COAST—Alderman Reilly announced late last week that because the Chicago Park District has failed to adequately maintain it, Argo Tea will be taking over Connors Park. The company will build a teahouse in the middle of the tiny park, and it'll be required to maintain the park.

HYDE PARK—The development team behind the big Harper Court redevelopment project in Hyde Park finally made a big retail announcement for LA Fitness, which will anchor the first and third floors of Phase 1. Some new renderings of the development were also released.

LOOP—A reader reported that a piece of metal from Joffrey Tower fell and injured a tourist last week. A canopy has been erected around the entire building to protect pedestrians.

HYDE PARK—The construction boom continues in Hyde Park with a pair of new institutional buildings: The 11-story Reva and David Logan Center for the Arts and the new Theological Seminary building.