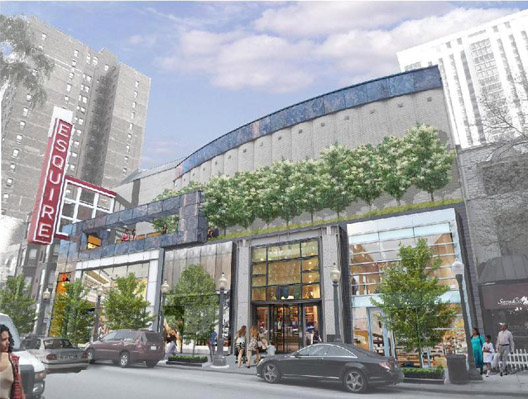 GOLD COAST—Over the weekend, Alderman Reilly announced that the old Esquire Theater, which had previously been under threat of demolition, will be converted into a retail complex. Not everyone is thrilled with the plan.

CABRINI-GREEN—Target is set to build another big store at Division and Larrabee, site of a recently-demolished high-rise. A new rendering was revealed this week, and plans for an urban farm next to the Target were announced.

LOOP—Developer Related Midwest pulled the trigger and acquired the unfinished Waterview Tower (the 27-story concrete stump on Wacker Drive). Related plans to add 38 stories to the base, creating a 65-story apartment building.

STREETERVILLE—Plans for yet another tall apartment building have been announced in Streeterville. Developer Golub & Co. is looking to build a pair of 42- and 11-story buildings at McClurg and Grand.