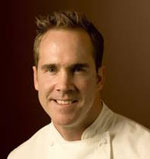 If you haven't seen much of Shawn McClain lately, it's possible he's been hiding away in Las Vegas. The Green Zebra chef opened Sage at the Aria Hotel two years ago and has fallen for the city. In a column he's guesting for Robin Leach (yes, that one), McClain said the city has now become a second home. "Living in Chicago, I was immersed in the grind of city life. I became so accustomed to the dense, urban population—traffic, bikes and noise—that I didn’t even realize how refreshing a move here would feel." Ah yes, there is something comforting about the constant dinging of slot machines. [Las Vegas Sun]