Jean-Georges Spot to be named by vote

Share All sharing options for: Jean-Georges Spot to be named by vote 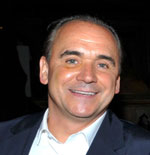 Who knew Jean-Georges Vongerichten was so diplomatic? Grub Street New York caught up with the celebrated chef at a party for the launch of his wife, Marja's, new show, Kimchi Chronicles and asked about his forthcoming restaurant project in the new Ian Schrager hotel Public. JGV said the restaurant will open in the fall, but they still don't have a name for it. In fact, they're going to let the people decide the name by a soon-to-launch online contest. Think it'll still be called the Pump Room? Be sure to voice your opinion once that goes live. [GSNY]