Lakeview certainly has no shortage of inexpensive, fast-casual dining options from many culinary points—sushi, Thai, Middle Eastern, Korean. And come early June, it's going to get an infusion of Vietnamese when Bun Mi Express opens.

The small storefront on Broadway near Roscoe will serve traditional banh mi sandwiches with everything on the menu coming in under $5. Owner Le Trinh will have eight fresh sandwiches (like pork roll with pate; BBQ pork, shredded chicken and sardine with tomato sauce, for $3.85) and four grilled sandwiches, including grilled chicken and a grilled Vietnamese sandwich, for $4.95. The menu will also feature spring rolls, bubble tea, Vietnamese iced coffee and Bobtail ice cream.

The space will have some tables in front and along the side wall, but Trinh hopes to keep things quick and casual and do a much larger take-away business. He'll hang a chalkboard menu behind the counter and have posters from Vietnam on the walls.

Trinh, who recently moved to Chicago after visiting the city and decided to open a shop here, follows in his family's footsteps; they own a few Mr. Baguette sandwich shops in Southern California, and his uncle also has a restaurant in Vietnam. Bun Mi Express is modeled after the Vietnam store, Trinh said.

Bun Mi Express should have its final inspections around May 21 and Thinh hopes to open by June 5. After that, he's looking to open a second shop in the DePaul area on Lincoln Avenue, but that space isn't solidified yet.

Check out the menu: 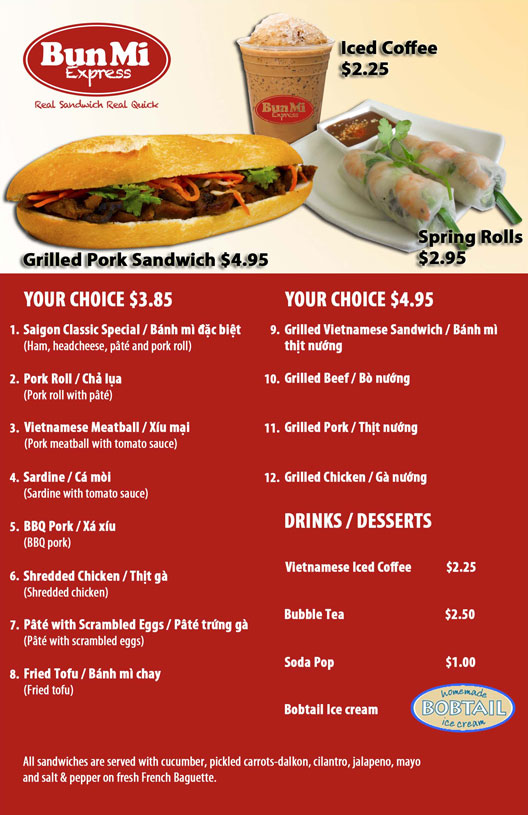