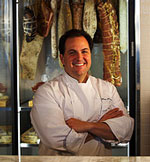 When Rick Tramonto pulled up the stakes and headed south to New Orleans to plan Restaurant R'evolution, it wasn't certain if the chef would have any new projects in Chicago. Now comes word that the former Tru partner wants to open up one, if not two, new spots back here. Tramonto, whose family still lives in suburban Vernon Hills, said he wants to bring Restaurant R'evolution to the city as well as an Italian concept. Nothing will happen until the NoLa project is up and running, but it may be as early as next summer. [Trib]
Rick Tramonto [Photo: Flickr]