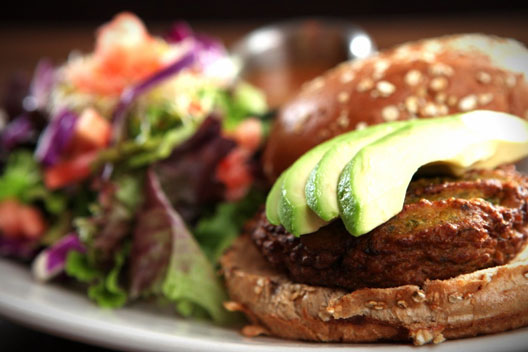 We've heard about some really excellent beef burgers in the city, but today we move away from the cow. Later today, we'll have the Veggie Burger Power Hour (look for it at 1 p.m.) so to tie it all together, The Florentine's chef Todd Stein talks about, in his own words, why he loves the Veggie Star Burger at Eleven City Diner.

The veggie burger at Eleven City Diner is a revelation and one of my guilty pleasures. It is an amalgamation of carrots, cauliflower, broccoli, peas, corn, zucchini and potato. I am not one to order a veggie burger, but my fiancé told me I had to eat it.

It comes topped with avocado, and I add sliced mozzarella, and ranch dressing on the side to dunk it in (and I love when it runs down my hand). It has this great crust that is formed with this incredible soft veggie center, kind of like eating a crème brulee, but veggie, on a bun.

It comes with a side salad, but who needs that filler. Listen, I know most people would think that I would be crazy to order a veggie burger at a deli, but it is that good. If you are not in the mood for the veggie burger, try the turkey burger, it is also really good.