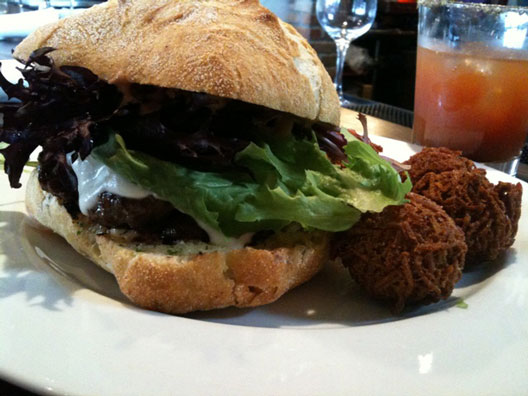 We've spent a lot of time talking about some solid burgers on the North Side, but this turn takes us down south a little bit to Pilsen where Chicagoist editor in chief, Chuck Sudo, talks about the mouth-watering wood-grilled cheeseburger at Nightwood.

The menu at Nightwood changes on a near-daily basis, based on seasonality of ingredients and what owners Jason Hammel and Amalea Tshilds, and chef Jason Vincent, can get their hands on. Like snowflakes, no two will be alike. The one exception to the rule is the Pilsen-based hot spot’s wood-grilled cheeseburger.

Nightwood’s burger is a subtle masterpiece, with touches like garlic aioli with a touch of concentrated tomato as their special sauce. The bun is a ciabatta roll with just the right amount of crusty texture on the outside, but soft enough inside to handle the ground beef from Slagel Farms, given extra flavor from homemade Worcestershire sauce. Fresh greens top this burger like a crown.

The size of Nightwood’s burger is also another positive. Given all the ingredients, it’s closer to the size of one of Kuma’s Corner's smaller mutant burgers. Unlike Kuma’s, you won’t get lockjaw trying to eat a Nightwood burger.

Although the burger never changes, the sides do. During the week, Nightwood serves this with some of the best fries in town. Fried to a golden crisp outside, these fries retain a light, fluffy texture. Come for the Sunday brunch and those fries are replaced with Nightwood’s interwoven golf-ball sized tots, made from julienned potatoes and fried a deep brown, are a perfect complement to one of the most amazing burgers in Chicago.