Burgers By the Numbers: The Counter

Share All sharing options for: Burgers By the Numbers: The Counter

Have you ever wondered how much work goes into having a successful burger joint? During Burger Week, we are talking with some of the busier burger-focused spots to find out how much food they go through in a single day. 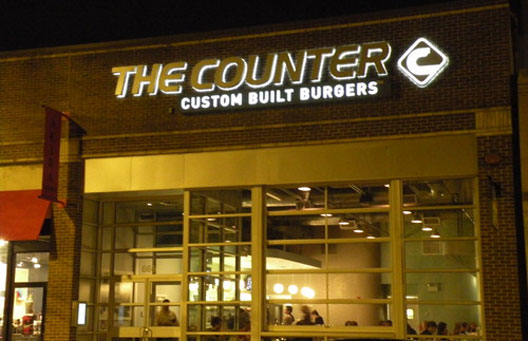 The Counter [Photo: 52 Weeks in Chicago]

We've already learned about DMK and Epic Burger and now it's time to hit The Counter.

This chain arrived in Chicago after already establishing itself around the country, mostly in California, and even has a couple of locations in Ireland. The Counter claims you can create millions of variations of their burgers with the numerous toppings they offer. So how does one location stack up? Let's check the numbers.

On an average day or week, The Counter in Chicago goes through:

· 12 bottles of ketchup
· 4 bottles of mustard
· 1,000 pounds of potatoes for french fries (per week)
· 70 pounds of onions for onion strings
· 40 gallons of ice cream for milk shakes (per week)
· 400 slices of 13 types of cheese
· 200 pounds of romaine lettuce (per week)
· 94: Percent of people who make their own combination (The Counter Burger is most popular among the signature burgers)
· 544,741,780: total number of possible burger combinations