As part of Eater's first ever burger week, chefs at three Chicago restaurants that don't serve burgers agreed to make a special limited-edition burger, served just this week. For the next three days, we'll highlight a new burger, starting with today's B.S. Burger from Belly Shack. 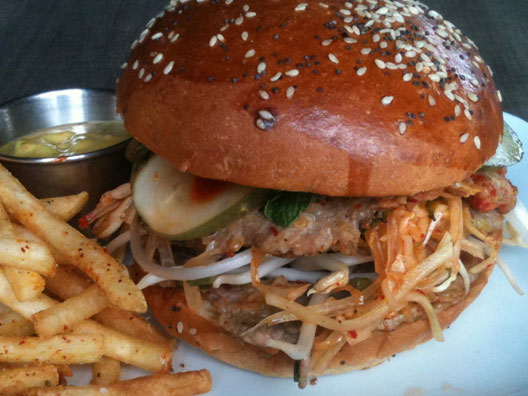 For a place known for its intricate Korean and Latin-inspired sandwiches, it almost makes sense that Belly Shack would have a burger on its menu. But up until now, it didn't. Owner Bill Kim, who also owns Urban Belly, confessed to us that he's had burgers on the brain for a while, but has been fighting the urge to put one on the menu. Kim's sous chef, Cameron Waron, recently started talking about "loose burgers," which are thin patties stacked atop each other. This got Kim thinking about a trip to Vietnam and Thailand about six years ago (with Arun Sampanthavivat, no less) and he remembered having similar burgers.

The burger will be served with a side of togarashi fries with a curry mayo and be available at Belly Shack all this week for $12. And since Kim already had been thinking about burgers, he said that if people love it, he may consider adding it to the menu permanently. Stayed tuned to get a sneak peek of the burgers from Graham Elliot and Mercadito.