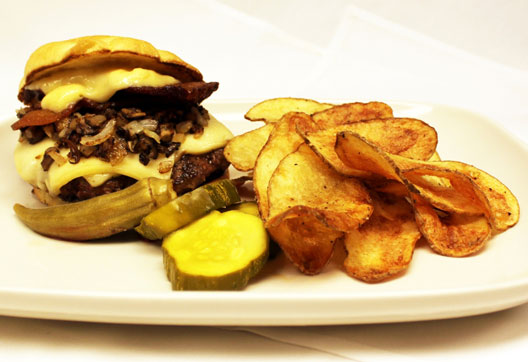 We kicked off our Hamburger Helpers series with Spiaggia chef/owner Tony Mantuano who talked about the 40-day dry-aged burger from David Burke's Primehouse. Today, in his own words, Time Out Chicago dining editor, David Tamarkin:

I hear that some people go to Big Jones for the Southern food. Sometimes I do that, too. But usually, I go for the burger. A Big Jones burger is, for me, a stress-free one—I don't have to worry about things like the provenance of the meat (it's from Mint Creek Farm), or whether it will be cooked the way I want (I order mine medium-rare, and have always been met with just-pink meat, full of juice).

And while the way it's dressed up isn't groundbreaking—plenty of other burgers are topped with swiss, bacon, mushrooms, onions, pickles and aioli—few burgers pull off this much decadence with this much class. Every element of this thing has been thought out, and you taste each topping and yet you also taste the beef—that's the best thing about it. The worst? After finishing one, it's very difficult to get motivated to order dessert.