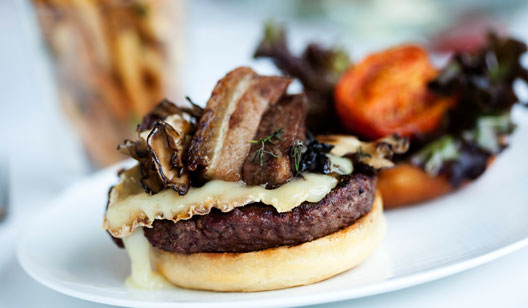 Earlier today, TOC's David Tamarkin told us why he loves the burger at Big Jones. And now, it's Chicago magazine chief dining critic Jeff Ruby's turn to tell us, in his own words, why he can really get into the burger at Naha.

It’s hard to remember now, but once upon a time big-name chefs did not serve hamburgers. At least, they didn’t cop to it, unless they were grilling at home for their family, in which case, they made the Greatest Burgers On Earth (i.e., burgers you would never get to eat unless you happen to be, say, Michael Kornick’s kid). But Carrie Nahabedian put an Angus beef burger on Naha’s lunch menu long before the stunted economy made it prudent to do so.

The half-pound of 80/20 prime beef gets flamed over hickory and cherry wood until it’s lightly charred and juicy; the roasted roma tomatoes taste fresh regardless of season. And the bun: Good god, the bun. Naha’s kitchen team crafts it from focaccia dough, then bakes it like a ciabatta, toasts it and crusts it with sea salt. It’s dense and wonderful, the perfect palette for top-notch hand-patted beef with a mess of caramelized onions and some stone-ground mustard. $17 may sound like a lot for a burger, and it is, even with wonderful hand-cut fries. And if you want to accessorize, say with a melt of creamy Valdeón or crisp slab bacon, you pay extra. But it’s money well spent, every time.