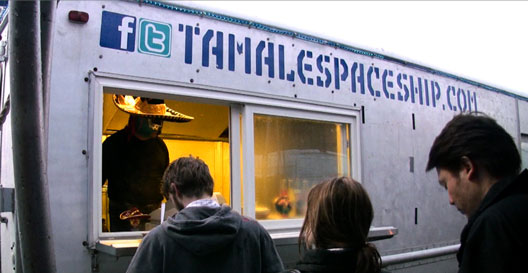 “When food trucks pop up, it’s a happening, it’s a thing, it gets people excited,” said Heather Shouse, former Time Out Chicago food editor turned author of Food Trucks: Dispatches and Recipes from the Best Kitchens on Wheels, out now from Ten Speed Press.

Nothing made her point better than the crowd that turned out for the Food Truck Summit-slash-book release party she threw last night with the help of Goose Island at its Clybourn brewpub. Despite weather that would have had to improve significantly to be lousy, a couple hundred food truck fans clustered under a tent to sample food for $3 a throw from half a dozen of the city’s food trucks, including pork pozole naan-wiches from Matt Maroni’s Gaztro-Wagon, Cary Taylor’s gouda-truffle mac’n’cheese from The Southern Mac (served up by owner Jim Lasky), caramelized onion empanadas from 5411 Empanadas and cupcakes from Sweet Miss Giving’s and Flirty Cupcakes.

Though Tamalli Space Charros was there in full Mexican wrestler regalia, the real far-out vision of the future may have been Evanston’s Hummingbird Kitchen, whose truck can do what Chicago food trucks can’t yet—actually cook the food on board, as they demonstrated with veal meatballs and freshly fried fries.

Another thing no food truck can do is serve beer, but inside Goose Island they were serving Saison Curbside, a food truck-themed saison brewed by Shouse and Goose Island head brewer Jared Rouben to a crowd ranging from chefs like Jason Hammel (Lula Cafe) and Eddie “Edzo” Lakin to food writers including the Reader’s Mike Sula, Chicagoist’s Chuck Sudo, David Hammond and Gapers Block’s Andrew Huff.

Given that one of the things that attracts Shouse to the whole idea of food trucks is the independence and little-guy-entrepreneurial spirit that the trucks represent, the most fitting part of the whole night may have been that it had a fast-thinking, fearless food truck crasher. Though Shouse limited the summit to full-size vans with serving windows, Ja Jerk Chicken pulled up its small “roach coach”-style truck next to Hummingbird Kitchen and sold complete dinners to those who couldn’t face standing in line for half an hour for an empanada or a tamale. Talk about renegade.
· All Food Truck Coverage on Eater Chicago [~EChi~]