Brian Enyart Leaves Topolobampo After 14 Years; Goes Out on a High

Share All sharing options for: Brian Enyart Leaves Topolobampo After 14 Years; Goes Out on a High 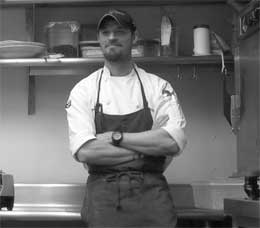 Brian Enyart has spent his entire adult life working alongside Rick Bayless, but as of last night, the Topolobampo chef de cuisine is a free agent. Enyart announced in January he would leave his post to explore new options, but for now he's going to kick back and relax. He said he's taking the month off to regroup and reflect on his 14-year experience working within the Frontera world. But after working in the same place since you were 19, it's got to be weird to wake up and have nowhere to go.

"I'm a very regimented person and now I'm not. I woke up a little late, did some cleaning and I'm going to eat lunch and go for a run," Enyart said. "I've learned to take life moment by moment and not think 10 years down the road. What I really want to do over the next couple of days is to think and feel what it was like to leave that place. I want to soak all that up."

When we spoke with Enyart this morning, you could almost feel him glowing through the phone. He said his send off yesterday was one of the best days of his life. "It was one of those rare experiences in life where people were generous in telling me what sort of impact I've had on their lives and careers and it was that "Christmas Story" moment when you realize how you effect people," he said. His staff made him lunch, showered him with love and praise, then there was a dinner, Champagne toasts and, at the end of the night, everyone signed his chef's coat.

As a parting gift, Bayless and his wife, Deann, got him a copy of Modernist Cuisine. "[Bayless] got choked up during the meeting and couldn't say a whole lot," Enyart said. "I've never seen that before in my 14 years. He and I have had an amazing relationship over the years. It's more than a boss/employee."

During his 14 years with Bayless, Enyart has served as pastry sous chef at Topolo, sous chef at Frontera, managing chef of both restaurants and, since 2007, chef de cuisine at Topolo. But after spending nearly half of his life working in the same restaurant, he felt it was time to explore what else was available to him. So, what's next? For now, he has some consulting work set up and plans to network, catch up with friends and family and explore other restaurants' menus. Will he open his own place? "I don't think a restaurant of my own is in the cards any time soon."

As for his replacement, no one has been named as chef de cuisine just yet. He thinks his responsibilities will be divided up among the sous chefs and he, frankly, couldn't feel more comfortable leaving his duties to the team. "I didn't plan my leaving based off what was next, but how good the staff was," he said. "I chose this time because I feel this is the strongest the staff has ever been. I wanted to leave on a note where they're going to be set up for success for the future."

Now that he has earned a Michelin star and a James Beard award, is there anything else he wants to win? "There's not an award out there to be honest, but I was given this enourmous gift for working there for as long as I have and I want to do that proud and I want to be able to contend with my peers," he said. "We have the best food city in America and to be able to rub shoudlers with the talent in chicago is humbling and amazing. I want to continue to be part of the upper echelons of the chef community."
· Enyart Leaving Topolo [~EChi~]
· All Rick Bayless Coverage on Eater Chicago [~EChi~]