Ok, we swear we're not on the take from the Boka Group, but they're dropping some great bombs this morning. Earlier we revealed two new sous chefs for GT Fish & Oyster. And now we have a picture of the final menu.

Over the last few months, chef Giuseppe Tentori has been developing the seafood-focused menu, even bringing in a couple of his heavy-hitting chef friends for a session of taste testing. We knew they'd have things like New England clam chowder in a mason jar; mussels, a fat lobster roll; and super crisp fish 'n' chips. Now, with the opening imminent, Kevin Boehm pushed out a picture of the final menu, and, while you can't see the whole thing, it goes without saying that we feel really bad for people with shellfish allergies.

The menu promises things like tuna poke; foie gras terrine; brandade croquettes; stuffed squid with chorizo and shrimp; roasted PEI mussels; king crab legs; black gnocci with squid ink and so much more. We wish we could have a clearer menu that you can scroll through and, in due time, we hopefully will. In the meantime, feast your eyes on this. 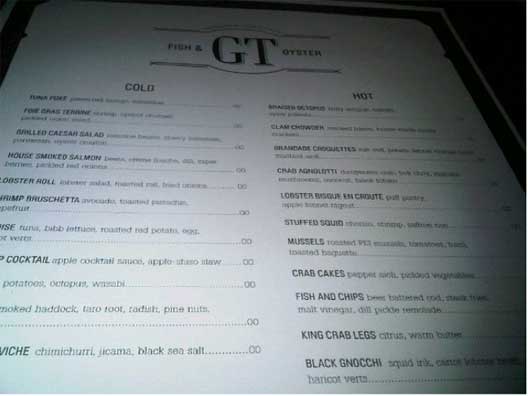