Share All sharing options for: Friends of Eater Talk About What Restaurants They Broke Up With in 2011

As 2011 comes to a close, Eater surveyed a number of industry types, writers, bloggers, eaters and more. We've already covered Top Standbys, Top Newcomers, Top Dining Neighborhoods, 2011 in one word, Biggest Dining Surprises and Single Best Meal. Everything will be revealed—cut, pasted, unedited and unadulterated—by the time we check out on Friday to ring in the New Year. 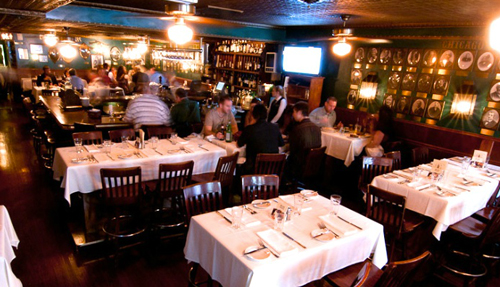 Q: What restaurants did you break up with or stop going to in 2011?

Lisa Arnett, Metromix: I adore the Purple Pig, but have all but given up on going there with a group because of the crowds during peak times.

Ellen Malloy, Restaurant Intelligence Agency: I made a commitment in 2011 to stop going to restaurants as an obligation and just go where I want because I am excited to dine somewhere. I am about 90% there on phasing out commitment dining but am going cold turkey in 2012.

David Tamarkin, Time Out Chicago: No. I don't date restaurants. What kind of question is this?

Chandra Ram, Plate: I had high hopes for Due Lire, but lost them after my boyfriend got a plate of six small gnocchi for $13. I think we can make an official call on this as price gouging.

Carly Fisher, The Feast: Anything that arrived in food truck form. I'm all for the cause, but since I don't work downtown, it's counterproductive to me to go across town to buy $10 trendy food in a box a mobile vehicle.

Nick Kindelsperger, Serious Eats: Not really. It's always on to the next place.

Mike Gebert, Grub Street: I stopped defaulting to Longman & Eagle so I could actually try some of the other places around it like Telegraph, but that's not really a reflection on them... just that they have more and more good neighbors.

Kate Bernot, BlackboardEats: Sadly, most of the cheap BYO sushi places in my ‘hood. They weren’t great to begin with, and once I tasted Arami, it was over. Better to have one mind-blowing nigiri experience than ten mediocre makis.

Natasha Liberman, a la card Chicago: Hmmm ... not really. I don't go to Big Star as often, but we've definitely not broken up—still love it!

Julia Kramer, Time Out Chicago: If it's even remotely nice out, I do not go to Big Star. Can't deal.