As 2011 comes to a close, Eater surveyed a number of industry types, writers, bloggers, eaters and more. We've already covered Top Standbys, Top Newcomers, Top Dining Neighborhoods, 2011 in one word, Biggest Dining Surprises and Single Best Meal. And now, with our last post—2012 Headline Predictions—all is being revealed—cut, pasted, unedited and unadulterated. With this, we are almost done with 2011 and close to checking out before New Year's Eve. 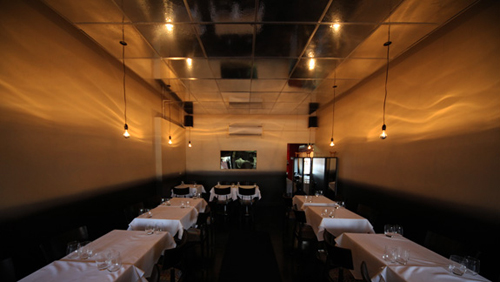 [Photo: Will Schwa hire a professional answering service in 2012? Only time will tell. ]

Q: What is your dining world headline for 2012?

Natasha Liberman, a la card Chicago: "Paul Kahan & team to open a yakitori restaurant à la Big Star!" After all, PK did recently travel to Tokyo and the yakitori restaurants there are fabulous and mostly very casual. We have nothing like it. A restaurant dedicated solely to tempura would be great, as well. Just my wishful thinking, I suppose.

Lisa Shames, CS: Bread bakeries will be on the, um, rise.

Emily Fiffer, Daily Candy: People will start butchering meat at their own tables.

Nick Kindelsperger, Serious Eats: Whatever it is, it'll probably happen in the West Loop.

Chandra Ram, Plate: Brunch is hot: Between new spots like 2 Sparrows and Bleeding Heart, old favs like Jam and Ina's, and delish brunch offerings at spots like Publican, The Southern and Perennial Virant, morning is the new night.

Lisa Arnett, Metromix: Everyone and Graham Elliot opens restaurants in the West Loop.

Michael Nagrant, Sun-Times: Next Accommodates All Who Want Reservations. Millions Complain About Next’s Lack of Exclusivity on Facebook.